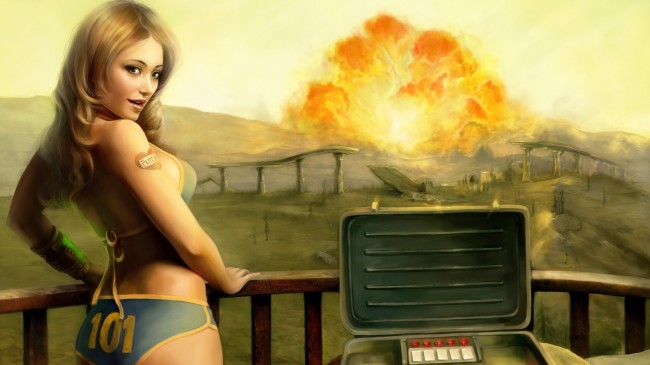 Original Article [11/02/2013 – 07:37]: More information from the Survivor 2299 teaser site, for the ostensible release of Fallout 4, was almost an inevitability. The moment (at least one of them) that everybody has been waiting for has been and gone. For those unaware, the Survivor 2299 site has been meting out a slew of Fallout-related ciphers, messages and clues, perhaps suggesting the imminent arrival of everybody’s favorite post-apocalyptic video game franchise.

In addition to this, two countdown timers have been running down. The main countdown is scheduled to elapse on Wednesday Dec. 11, which many have reported to land soon after the launch of the VGX 2013 video game awards show.

However, a smaller sub-countdown timer, if you will, was also steadily ticking away to Sunday Dec. 1. Finally, this date is upon us, and we have now been greeted with additional Morse code messages.

With the promise of such a hotly anticipated title, the Reddit community and an army of eager Fallout fans began feverishly interpreting the mysterious, new sequences. Ultimately, the collaborative efforts of these resourceful factions appears to be paying off; although still far from being comprehensively dissected and understood, taking all the messages into account, a story appears to be gradually unfolding.

For those not yet versed in the latest developments, the Las Vegas Guardian Express has been following the story closely. Check out some of our previous articles:

After the countdown ran down to zero, the Survivor 2299 site was almost crippled by the sheer number of people attempting to gain access. Before becoming inoperable, the following code was obtained by Redditors:

The Reddit community spotted the first part of the message contained the decoding instructions, with “KNVGR” denoting keyed vigenére cipher and “REV ALPHA” abbreviated from reverse alphabet; meanwhile, “PPS VT” provided the team with a clue regarding the passphrase (PPS), which they deduced to be VAULT TEC (VT).

Using the decryption method (see sources for website), the following message was output:

We are all now fully aware that Boston is the top contender for the setting of the, as yet unannounced, Fallout 4. As described in a previous article, the Institute appears central to Survivor 2299, and has been mentioned on a number of occasions.

One of the very first decoded messages also referred to the Institute, with an unidentified character seemingly dispatching a message to his “dear sister.” Intriguingly, as shown below, the message also ends in a four digit number:

“My dear sister. I’m heading to the institute. God knows what happened to this place now. This old bastard will help us. He must help us. -0321-”

What does appear interesting is that whoever is responsible for Survivor 2299 seems to be creating a story, or perhaps even a series of segmented stories. The character issues a message, stating that he is heading towards the institute to seek help from an “old bastard.” It then appears that this aid was not at hand, and the Institute was already closed off.

Meanwhile, the meaning of these digits is yet to be confirmed, with both remaining as “loose ends” according to Redditors. In the past, it had been speculated that 0321 could refer to an android, of some kind, as the Institute was renowned for their construction.

Meanwhile, since the original Morse code message separated NGQHT 5120 out, using hyphens, some have suggested that NGQHT 5120 should be left out of the decoding process. In what might seem like a stretch, Redditor b-west indicates that NGQHT 5120 reversed is 0215 THQGN, which could be an abbreviation for The HeadQuarters of Galaxy News; perhaps the REV ALPHA command was not simply reserved for use with the vigenére cipher?

Black Row also currently remains a mystery, and there appears to be no mention of this as a term or location in Fallout lore. However, a number of users appear to have drawn a tentative link to Merchants Row, principally based upon the vague similarity between the two names.

Merchants Row is a short street within the Financial District, located in the heart of Boston. Also, Swimandskyrim makes the point that MIT would make a suitable location to seek refuge from potential attack, as the campus is allegedly built upon a network of underground tunnels.

The Invasion of Vault 119

Whilst the tenacious Fallout fans were still reflecting over the hidden meanings of the previous message, further Morse codes began emerging. The following SOS cipher was uploaded to Survivor 2299:

With “sos” representing a general distress call, and “qc” believed to stand for “calling all stations,” the message was interpreted as follows:

Around an hour later, the next Morse code message rolled in:

An attempted translation was performed for the afore-mentioned sequence, indicating that Vault 119 was under sustained attack:

Yet another Morse code was then released, approximately five hours after the previous:

The next attempted translation suggested that, during an attack on level 4 of Vault 119, the overseer was killed:

The meaning behind MK I or Mark I remains elusive. However, MK I could refer to power armor, which would be a fitting requirement when facing attack. During Fallout: New Vegas, the MK I variant of the Enclave’s armor was fitted with a Tesla device and was also capable of “boosting the energy weapons skill” of whomever wore it. Equally plausible, it could also simply mean “we won’t make it.”

In the early hours of the morning, an additional Morse code message was posted, as follows:

As this news has only just rolled in, the decryption is a little bit confused, and Redditors are still yet to fully understand its meaning. The following codes have been interpreted:

So far, the attempted translation is as follows:

Vault 119 and the Mojave

Very little is known about Vault 119, thus far. The only mention of this vault, that we have stumbled across, can be found on the “Enclave of America Wikia,” which provides a relatively brief description of the facility. The wikia claims it to have been designated a Military Vault, but bombing commenced before its construction was finalized:

“Vault 119 was an unfinished Vault in the Mojave Wasteland that was going to be used primarily as a Military Vault with multiple VSS Simulations installed as part of the Enclave’s mission to have ready soldiers straight out of a Vault. However, the bombs dropped before the vault was entirely completed, leaving it empty. Upon its discovery, Enclave Command saw fit to refurbish the Vault and use it as a strategic bunker for future operations.”

We were unaware of any prior knowledge, concerning Vault 119. Obviously, with no supporting information available from other sites, this description remains unverified and should be viewed with caution. This could even be the work of fan-fiction; we are currently seeking clarification.

Looking at the existing messages, however, it’s difficult to consolidate Vault 119 being based in the Mojave.

Many thanks to one of readers, Matthew, who pointed these details out to us.

It is interesting to note that the Enclave was one of the only pre-war organizations to have endured the Great War and, according to the Fallout Wikia, had “… roots in various branches of the pre-War American government.” Of course, the U.S. government funded the inception of the Vaults and had control of their use, wielding the Vault Project for some pretty nefarious purposes.

However, this information would conflict with prior messages, which seem to infer that Vault 119 is located in, or around, Quabbin. On the other hand, if the Vault’s construction was incomplete by the time the bombs were dropped, this could explain the so-called “breach.”

This next section is wild speculation and could, quite conceivably be utterly incorrect. However, looking at all of the messages, as a whole, it is entirely plausible that a series of timelines are being presented; some of the messages released seem to be pre-War, whilst others are post-War.

Also, as previously pointed out, two other NPCs from previous games could have made their way to the Boston area. From Fallout 3‘s Broken Steel DLC, Dr. Madison Li is reported to have ventured to the Fallout universe’s equivalent of Massachusetts, The Commonwealth, to visit the Institute. An entirely different message, meanwhile, is thought to reference Desmond Lockheart; after completing a mission for Lockheart, from Fallout 3‘s Point Lookout DLC, he informs you that he is heading north to pursue his next rival.

This timeline appears very short, and is most likely incomplete:

In contrast, a number of the other messages are transmitted both before and during the Great War. The “Nuclear winter is coming. Reserve your future home today! 877-260-2299” message is, of course, pre-War. The follow-up message is very telling, potentially suggesting that no more homes could be reserved:

At this time, the provided phone number was unreachable, in keeping with the Overseer denying any further requests/bookings. Could this suggest that no more places were available in the Vaults, due to overloaded capacity?

We then appear to transition on to a series of messages that allude to a portrayal of some of the post-War events. Greater context and weight to this timeline is provided when putting the events in chronological order…

Messages from “Concord” and “Vault Technician”

The following timeline could show Concord, and other Vault authorities, attempting to communicate with Quabbin:

The next timeline could depict a compromised Vault in Quabbin, attempting to communicate with the outside world; theoretically, these events could take place immediately after the bombing, or some considerable time after. However, due to the cataclysmic events, their SOS transmissions go unheard:

The Clean-up Operation/Search for Survivors of Vault 119

The next part of the story then describes a clean-up operation, and/or a search for survivors, in Vault 119. It is entirely feasible that Black Row could represent a command hub, with ground teams returning tranmissions back to their leaders:

Meanwhile, Reddit user Wonderbus has theorized that – after the above events – an undetected survivor from the Vault then travels to the Institute for help, following the “breach.” Other Fallout fans point to the notion that the attack could have actually been perpetrated by the Institute, or even individuals from the elusive Black Row; interestingly, the latest filename for the Morse code mp3 included “TI,” perhaps a subtle reference to the Institute.

Again, these messages also suggest Vault 119 to be based in Quabbin, not the Mojave; this all hinges on whether the original ciphers have been interpreted 100 percent correctly.

So, what do you think? Plausible theories, or rampant speculation and nonsense? Please feel free to give us feedback, and share your theories on Fallout 4 and the Survivor 2299 messages. Many thanks to those providing us with tips and updates.

Update [11/02/2013 – 08:43]: As suspected, the Enclave of America Wikia page, which references Vault 119, is merely fan fiction and should not be considered as a source for Fallout information. Many thanks to Jim, who was kind enough to update us in the comments section.

Meanwhile, one of our commenters, Justin, has also made an excellent suggestion. He posits that “CLG BR OTST” could be an abbreviation for “Calling Brotherhood of Steel.”

We will keep you updated, as and when new developments arise.