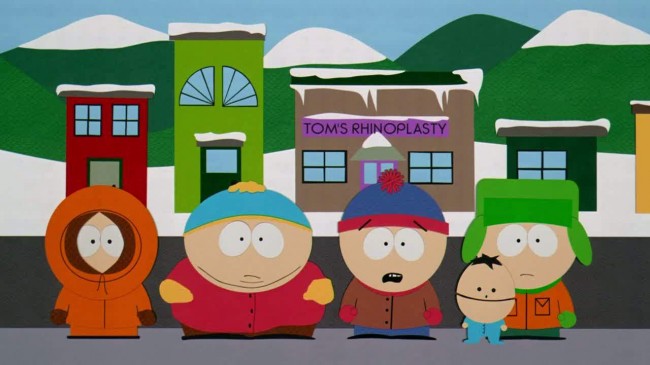 Kim Kardashian’s appearance in Kanye West’s “Bound 2” music video has caught a few eyes and prompted a few hilarious spoofs, but now South Park is getting in the mix and, as would be expected of the Comedy Central series, they did not hold anything back. Actually they straight up called Kim Kardashian fat and a “Hobbit,” they have also portrayed her fiancée as a “recovering gay fish.” Whatever that means.

On last night’s episode of the long running animated series a character named Butters rejects getting involved with a female friend whom he calls “too fat.” It might appear at first to be an example of offensive image stereotypes but soon the comment would turn to be more complex.

Another character, Wendy, proceeded to denounce Kim Kardashian as overweight and fat in reality, also calling her a “Hobbit.” Still waiting for information about how this conclusion was reached.

Of course the South Park creators could not stop there. Certainly they foresaw that a jab at Kim would not be dealt with lightly by her fiancée Kanye West.

Next the show hilariously depicted West indulging in one of his recently trademark, explosively self loving speeches. Clearly these were inspired by some of Kanye’s interviews over the past couple months.

In the episode, the fictitious West cannot properly defend Kim’s body, leaving the claim of Kim as a fat “Hobbit” clear to stand in the South Park universe. In other news Kim Kardashian has reported that she has lost nearly 50 pounds after her pregnancy, but others say her cover photo on US Weekly was airbrushed.

However, Kardashian’s fiancée was not finished influencing the episode after the fight over her appearance. In a brilliant move South Park anticipated the naming of Pope Francis as Time’s Person of the Year and had West steal the mike from the Pope before he was able to give his acceptance speech. For those who don’t normally watch the show, this really is just another day in the lives of its characters.

There will probably be a strong reaction from West and Kardashian who do not appear to shy away from their portrayal in the spotlight. Particularly offensive scenes, at least to the couple, include when West’s animated character called Kim’s reality show Keeping up with the Kardashians a show about, “short, loud little people living in a fantasy world.”

West’s character also calls Kim Kardashian “fat” and proclaimed that she will never become as good as Beyonce. How these two are comparable is still up for debate.

The silver lining of the episode occurred when West proclaimed his undying love for Kim Kardashian no matter what mythical creature she had become or had always been. As was to be expected, last night’s episode of South Park proved to be over the top and controversial. It may have seemed obvious for them to share a joke aimed at the “Bound 2” video but I doubt anyone foresaw them calling Kim Kardashian fat and a “Hobbit” in the same episode.

Kim Kardashian Called Fat and a ‘Hobbit’ on ‘South Park’ [Video] added by Nick Manai on December 12, 2013
View all posts by Nick Manai →