Lung Cancer Might Not Be as Lethal as Once Believed

By Kimberly Ruble on December 9, 20132 Comments 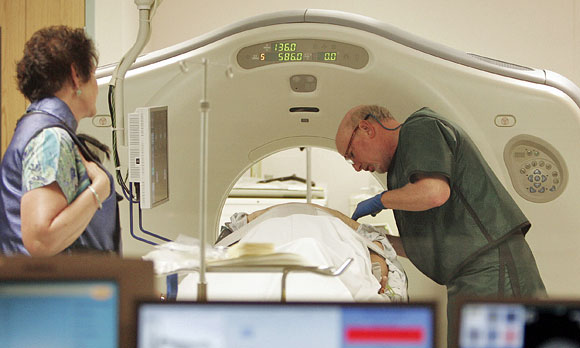 There is a new study that has been released which is suggesting that lung cancer, the major cancer killer in the world, might not be quite as lethal as physicians once believed. It states about one in five lung tumors which are found on CT scans could be so slow-growing that they might never cause any health problems.

Such results were not false-positives, which are suspicious results that turn out not to be cancer after they have been tested more deeply. These tumors are definitely cancerous, but they are ones that do not cause any sort of symptoms and may have never became deadly, stated researchers.

Regardless of these findings, it is unlikely that doctors will alter how they will treat lung cancer.

One reason is the disease is typically diagnosed only after symptoms develop and the tumors are showing up on a regular chest X-ray. This is the time when lung cancer has progressed to the point when it has become potentially life-threatening.

Doctors also do not really know as of yet how to define which symptomless tumors that show up on the CT scans could become dangerous, so they habitually treat all cancers found very aggressively.

Such findings emphasize the need to identify genetic markers which could aid physicians in determining what tumors are harmless and which ones are going to have to need treatment, stated Dr. Edward Patz, Jr. He was the main author of the study and is also a Duke University radiologist.

He believes that patients who are seeking lung cancer screenings need to be told about the research results.

He stated that individuals need to understand that doctors may find some cancers that if they never looked they would never treat. Among many patients and even several physicians, it is not something that is well known with cancers of the lung.

The more that the research is brought to the public, the more it is believed they can make informed decisions.

Lung cancer patients have stated many times that cancer screening done via CT scans helped them of the disease. Yet the study seems to show that in numerous cases,  the individuals may have been cured of a disease they did not need to be cured of in the first place.

The research study was printed Monday in the journal JAMA Internal Medicine.

There are over 200,000 American citizens who are diagnosed as having lung cancer every year. Over half of them will die from the disease. Across the world, there are over 1 million deaths due to lung cancer yearly.

This new research was gathered from a trial held that involved over 53,450 people who were at a high risk for lung cancer. They were followed for approximately six years. About half of the group received yearly CT scans. This is a kind of of X-ray that is more sensitive than the ordinary kind. The other half got three annual regular chest X-rays. Through the six years of following the individuals, about 1,090 lung cancers ended up being diagnosed in the patients who had the CT scans. There were around 970 in the individuals who had the chest X-rays.

This seems to show that CT scans are discovering a lot of early lung cancer cases which might never go past the point to where they would show up on a regular chest X-ray.

Such analysis proposes that for every 10 lives which are saved by the CT lung cancer testing, about 14 individuals have to be diagnosed with a lung cancer which might never do any health harm.

Having a high rate of over-diagnosis shows that understanding of cancer has evolved very much. Years ago, every cancer was a death sentence.

Now it is a fact that certain types of cancers, including many types of prostate cancers, grow ever so slowly that they might never need any treatment.

However, the low-dose CT scans have shown to be the only effective testing which reduces lung cancer deaths in high-risk individuals such as smokers. So over diagnosis is to be expected from any successful cancer screening program.

But any way it is looked at, if lung cancer might not be quite as lethal as once believed, this is a good thing.