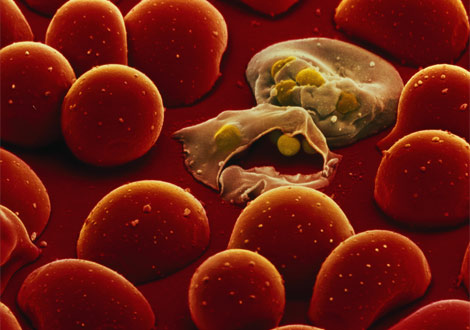 Caroline Buckee, an epidemiologist of Harvard dreams that one day cell phones will warn common man of a malaria outbreak. Though it is strictly in the research phase, still there are hopes that this technology can someday become a life saver. The human mobility model is under research and development with the help of data available about this parasite. A World Health Organization report this year pointed out that more than 3.2 Million people is killed by the parasite every year. The reduction in incidence of the disease accounts to 29 percent globally and 30 percent in sub-African countries, this parasite does exist in many other nations of the world too.

WHO’s Director General, Margaret Chan said that though there has been massive progress in controlling malaria still there is not room for complacency. Around 80 percent of the deaths are caused due to malaria in Africa and many other South-East Asian countries and approximately 3.4 billion people are still at risk of catching this disease. A great work has been done by the WHO mostly during the period of 2000 – 2012, where almost 3.3 million lives were saved from this deadline parasite.

Due to the concerted effort of proper funding and sincerity malaria mortality rates reduced by more than 44 percent globally and more than 48 percent on the African continent. Since 3.4 billion people are still at risk therefore it is quite imperative that it is further reduced and more funding comes in from the governments. If cell phone predicts the outbreak of a malaria attack, what can be better than that? The Harvard epidemiologist added saying that there are a massive amount of data available in terms of cell signals throughout Africa.

In Kenya alone, 15 million cell phones operate in different signal zones. These data collected from all the countries will be laid down to calculate and find out how the movement of people helps the incidence of malaria. If a chart is drawn out to pin-point the regional segregation of malaria incidence then through this mathematical model, a lot of preventive measures can be put in place to stop it. It may seem a bit far-fetched now, but who will hope if human do not? A malaria death not only reduces population but also bring down the overall income of any economy.

It is believed that a single malaria death causes the community to lose more than $39,000 in benefits, so it is quite a logical thing to invest in malaria prevention factors rather than losing that kind of money. In 2012 there was 206 million incidence of this disease which may feel like a lot, but compared to the years before 2000, it is nothing much.

Having understood all the facts and figures it is quite important to continue this kind of a progress in the coming years. So, if a cell phone can track down a malaria outbreak someday, Buckee will definitely be remembered in the history of mankind. WHO has already confirmed that from 2016 forward a lot of funding will pour in for this cause and so if some of it goes into the research of preventive measures like Buckee says, it would be best that can happen.