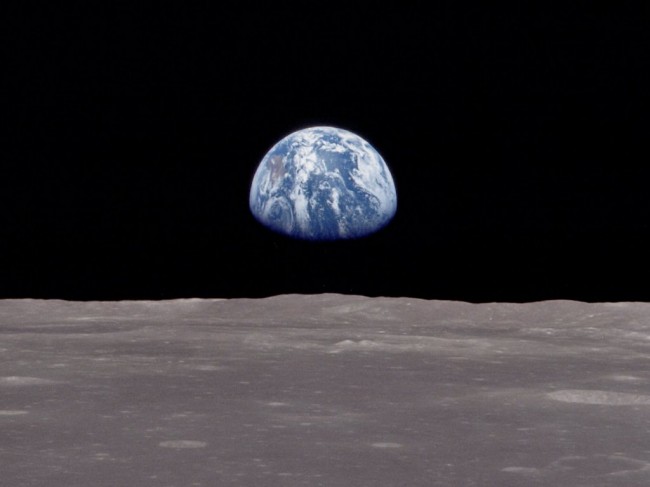 Only four days before the 45th anniversary of the now-iconic “Earthrise” photo, NASA has released a stunning recreation of the events leading up to and during the snapping of the first gorgeous full-color photo of the Earth rising above the gray, barren surface of the Moon.  The video was created by taking topographic data generated by the Lunar Reconnaissance Orbiter (LRO), which has been orbiting the Moon since the year 2009, and synching it up with what was known about the historic photo through timed photos taken by the Apollo 8 astronauts as well as their recorded conversation during the event.  When all the elements are pieced together, it creates an astounding record of what has come to be seen as a symbol of man’s greatest voyage thus far:  his journey to the Moon.

The now-historic event began with the launch of Apollo 8, the second manned mission in the Apollo space program, on December 21, 1968.  With this successful launch, astronauts Commander Frank Borman, Command Module Pilot James Lovell and Lunar Module Pilot William Anders, became the first humans to ever leave low Earth orbit.  In addition, they were the first to see the planet Earth as a whole planet and the first to directly view the far side of the Moon as they orbited around it.  This mission was also the first manned launch from the John F. Kennedy Space Center in Florida, located near Cape Canaveral.

It was on Christmas Eve as the crew was coming around from behind the moon for the fourth time that they were first able to spot the awesome site of the Earth emerging over the Moon’s horizon.

While it was Anders who took the photo – which has been referred to as being among “100 photographs that changed the world ” and one of the “great images of the 20th century,” by the editors of LIFE and TIME magazines respectively – it becomes clear while listening to the recording that it was very much a team effort.

As the video begins, Borman announces the start of a roll maneuver and then Anders is heard describing what he sees out the window as they move above the Moon’s surface.   As they move along, timed photos are being snapped every 20 seconds by a Hasselblad camera with an 80 mm lens mounted on Borman’s front-facing window, called the “rendezvous window.”  It is these photos, compared with the terrain maps generated by the LRO, which allows for their route over the Moon’s surface to be recreated visually.

Anders is first to spot the Earthrise, proclaiming, “Oh my God! Look at that picture over there!  There’s the Earth comin’ up. Wow, is that pretty!”  Bormon chides him, telling him to not a take a photo because it’s not scheduled.  Then, realizing that he is using black and white film, Anders asks Lovell for a roll of color film.

After a few tense moments, Lovell manages to locate the film; but it appears that the moment has passed and the Earth is now out of view.  However, as they continue to rotate, the Earth once more comes into view, with Lovell spotting it through the hatch window.  With Lovell coaching him on how to take the shot, and both men clearly excited about their find, Anders takes several clear shots of the Earthrise.  One of these photos was what was to become the now-iconic Earthrise photo.

As the video comes to a close, the moderator reminds the viewer that without Borman making the roll at just the right moment, Lovell quickly locating the color film and Anders spotting the sight and taking a well-timed photo, this amazing feat of photography would not have been possible.

What makes NASA’s release of the stunning Apollo 8 Earthrise recreation video additionally special is the fact that we simply didn’t know up until now what the events leading up to the photo looked like, other than what the astronauts themselves described.  Now, for the first time in 45 years, we are able to go along with them for the ride, experiencing the awe and excitement that these men felt right along with them.