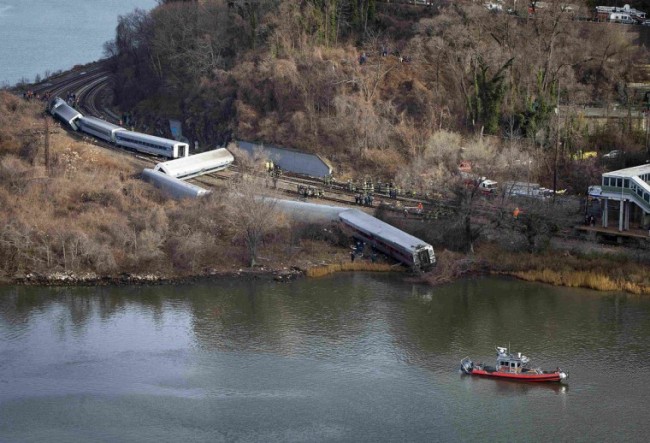 It was not reported how Amtrak plans on restoring the service. The Northeast Corridor of Amtrak includes Boston and Washington, which were not affected. This New York City derailment happened Sunday morning around 7:22 a.m. A southbound train went off the tracks near Spuyten Duyvil station in the Bronx. It has been reported that the derailment killed four people.

Reports claim there were 63 passengers who were injured, 11 of whom were in critical condition. The service on the Metro-North’s Hudson Line has been shut down until further notice. There is a shuttle service being provided by the railroad between White Plains and Tarrytown. There is said to be a connection to Metro-North’s Harlem Line for those who are traveling in and out of the Grand Central Terminal.

The train was half full of passengers when it crashed. There were roughly 150 souls on board of the derailing train. It is fortunate that this did not happen on a fully occupied workday, sources have said. If it were to occur on a workday, there would have been a lot more than just four people killed.

A passenger claimed he was asleep and awoke to the car rolling several times. He then saw the gravel coming at him and heard people screaming. He claimed there was a lot of smoke and debris everywhere. The passenger told New York City reporters there were people who were thrown from one side of the train to the next. He believed the train was going very fast when it had crashed. The force of the crash threw him against the window, injuring his right hand.

There were four train cars knocked on their side when the officials arrived. They claim it will take awhile before they will be able to assess all the injuries and damage involved. The cars just barely avoided plunging into the Hudson River.

There were nearly 130 firefighters on the scene to help pull people from the wreckage. Many of the injured were rushed to hospitals within the area for treatment. Officials have gone through the site numerous times to make sure there weren’t any others hurt.

The initial concern was whether people were ejected from the train and landed in the water. The New York City Police sent a dive team, helicopters, and a canine squad into the waters. Fortunately the team didn’t find evidence to support the ejection theory.

Homeland Security has informed President Barack Obama of the New York City derailment. A White House official said the president’s thoughts and prayers are going out to the friends and families who had lost someone involved with the derailment. A similar incident happened this past July when a CSX freight train was hauling trash. The train was on the same line when it derailed in the same area of the Bronx. The cause of the derailment is unknown, but the investigation will continue. The public is curious as to what changes Amtrak plans to do to its line. It is unfortunate that four people lost their lives today, but officials say this New York City derailment could have been a lot worse resulting in many deaths.