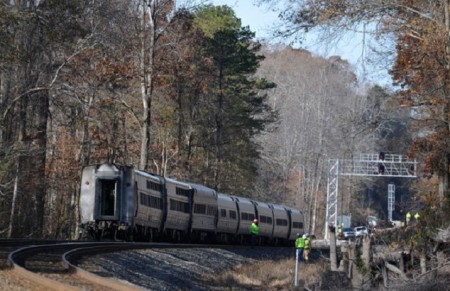 A New York City Metro-North passenger train bound from Poughkeepsie to Grand Central Station derailed at 7:20 a.m. in the Spuyten Duyvil section of the Bronx borough this morning resulting in multiple fatalities. Current reports indicate that their have been at least four deaths, two of those to passengers thrown from the train upon the impact of the derailment.  There have also been in excess of 40 passengers injured, a number of them seriously.  Many passengers have been seen leaving the site on stretchers and many others appeared bruised and bloodied as they walked away from the scene.  Surviving passengers describe being tossed about the cars, hearing screams, and the cars filling with smoke as they were trying to escape.

It appears that five of the New York City Passenger train’s seven cars derailed in this incident resulting in multiple fatalities, with at least two cars on their sides. Initial reports indicated that cars were submerged in water but these were later deemed inaccurate, though at least one car did land perilously close to the water’s edge, near where the Harlem and Hudson rivers meet.

The crash was initially reported by the engineer. Emergency personnel report that in excess of 100 firefighters responded immediately to the scene. Ambulances, police and rescue workers also responded after the New York City Police Department declared a level three mobilization in response to the derailment. Eyewitnesses describe scenes of emergency personnel breaking windows to rescue passengers and some were taken from the scene on stretchers.

The train came off the tracks while rounding a sharp curve and one passenger who takes this same train every week said it seemed to be traveling more rapidly than normal.

Service on the Hudson Line, where this derailment occurred,  is suspended indefinitely. The Hudson line serves New York City, Westchester, Putnam and Dutchess counties and ends in Poughkeepsie.

Today’s derailment is not the first problem on New York City’s Metro-North Hudson line in recent months.  In July a freight train hauling garbage derailed  in the same area of the Hudson Line. Fortunately, no serious injuries occurred in that mishap. The cause of that derailment has yet to be finally determined by the National Transportation and Safety Board (NTSB).

Two other New York City Metro-North passenger trains also had a  major catastrophe earlier this year.  Last May, two Metro-North passenger trains collided near Bridgeport, Connecticut on the city’s New Haven line  during the rush hour commute. Dozens of injuries resulted, some of them quite serious.  NTSB reports indicated that faulty tracks may have played a part in that crash.  However,  Metro North’s position has been that the problem with the tracks that has been identified in that report was not serious enough to require immediate attention.

No suspected cause has been identified for the New York City passenger train’s tragic and  fatal derailment. However, criminal intent and terrorist activity have both been quickly dismissed as possibilities.  It remains to be seen whether the NTSB’s investigation into this derailment will include specific concerns about the fact that another derailment occurred in the same area of the Hudson line so recently.