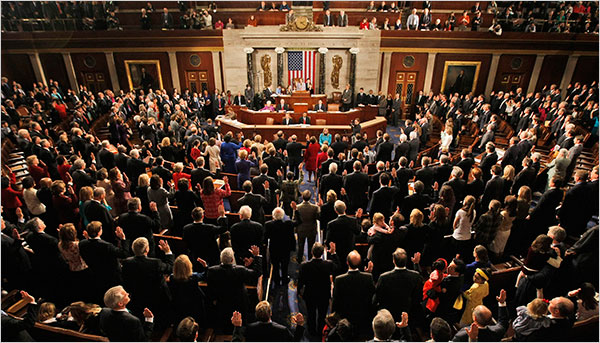 The Republican Party leadership has been squabbling among themselves in the media in recent weeks, leaving Democrats to simply sit back and watch a party content with fighting itself. According to Dan Balz, of the Washington Post, the current explosion of disharmony within the party is merely the public getting a glimpse of battles that have been going on since President Obama won the White House. The facade of solidarity with the Tea Party conservatives survived until the backlash of the government shutdown began to concern establishment Republicans enough to prompt a response. That may be so, but it is unlikely to impact real decisions once election time comes.

According to Jennifer Duffy of the Cook Report, most people see the Tea Party candidates as extreme, and out of touch with modern day America. In her opinion, establishment wing Republicans feel Tea Party primary challenges divide the resources of the party. In addition, Tea Party candidates give Democrats the opportunity to paint all Republican candidates as having those extreme views. Whether or not this is true is most likely a moot point come election time. Republicans have been compromising with each other since long before they started doing it with Democrats. Republican’s are very rarely actually content to be fighting with itself.  When it comes to elections, it all comes down to numbers.

More than half a dozen sources, according to Politico magazine, report that Virginia Representative Randy Forbes wants to take an important committee chair position when it comes open. They further report that he has been lobbying the National Republican Convention Committee (NRCC) and some of his peers for them to withhold funding from openly gay Republican candidates. Nobody knows why, but the information about his lobbying efforts were leaked in great enough detail to convince the press to believe it.  It really does not matter whether or not he did, because the two gay candidates have declined to comment about it, and nobody else is telling.

What matters is that Forbes will most likely get his chair and the party will most likely fund whoever it wants in the elections. Compromise is the only effective way of advancing an agenda over time. If Republican Party goes against all sense and implodes, it would be the rarest of occasions. The Republican Party members very seldom get in their own way for long before the situation is resolved. For that matter, the Democrats don’t do it often, either.

The truth is that no matter how the political pundits want to spin the disagreements between party members as proof that the Republican Party is not united, they will eventually be united when it comes to crushing the opposition.  It does not matter that they pick fights for the media or call each other out in hotly contested primary challenges. That is all style and no substance. The substance is that they eventually get around to working it out in time for elections. In that, it is fair to say that the Republican Party is content to let people think it is going to remain at war with itself, until they aren’t.