Texas Teen Both Starving and Obese Fights for Life-Saving Surgery 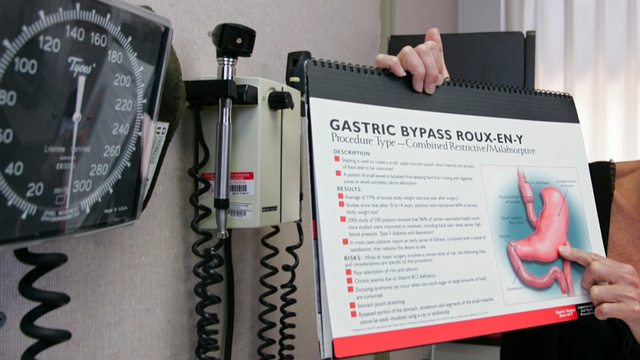 A starving  and yet obese teen fights for life-saving gastric bypass surgery. The young Texas girl, Alexis Shapiro, age 12, is only 4 ‘ 7” tall but weighs 198 pounds. She is increasing that amount at a rate of at least two pounds each week.

This is all due to an extremely rare condition she is suffering from known as hypothalamic obesity; a result from another medical problem she faced. Two years ago, Alexis had to undergo surgery in order to have a rare but benign brain tumor removed. However, when this happened, her hypothalamus was damaged. Now Alexis always feels hungry and truly believes she is starving, even as her weight continues to increase and even as she is kept to a strict diet regimen.

The Texas pre-teen was tiny and slim before the brain surgery, yet now hovers near the 200 lb mark. Jenny Shapiro, Alexis’ mother, stated that the family had resorted to putting padlocks on the kitchen cabinets in order to prevent the teen from eating so much. The girl was told by medical doctors that a gastric bypass operation would help restrict her expanding weight, and hopefully alter her brain’s response to feelings of fullness.

But the family’s healthcare plan, TRICARE, which provides insurance to U.S. military members and their families, would not pay for the $60,000 operation on the reasoning that Alexis was too young. TRICARE stated that for people to be approved for gastric bypass operations under their plans, the patient has to have reached the age of 18 or have gotten to the point of complete bone growth.

The insurance company explained the Texas family could appeal the decision, but the Shapiro clan has taken another route. In desperation they decided to launch a fund campaign on an Internet website in hopes that donors would aid the girl in reaching the money mark needed so she could receive the bariatric surgery.

Yet as the same time, Alexis’ situation continues to grow worse. She now has been diagnosed with type 2 diabetes and was recently put in the hospital because of a kidney infection. The young girl had also informed her psychologist that she would like to die, stated Jenny Shapiro.

However, on Sunday morning, Mrs. Shapiro sounded very optimistic on the website fund page after seeing the amount of donations that have poured in. They are almost at the amount needed for Alexis’ surgery. She stated that she is going to be in contact with a Texas hospital on Monday to find out about getting things started for her daughter’s gastric bypass operation.

Hypothalamic obesity is caused when there is damage done to the hypothalamus. That is the organ, which is about the size of a fingernail, that helps to administer the proper amount of appetite and balance of energy. Research has shown that over half of all children who have tumors like the one Alexis had end up having disproportionate eating problems and extreme obesity.

But even at her age of 12, the Texas girl will not be the youngest person to ever have bariatric surgery. That record belongs to a Saudi boy, age 2, who recently had it done.

Hopefully Alexis Shapiro can get the help she so desperately needs and that the gastric bypass operation will help her get well.