Apache Helicopters from America Back Over Iraq 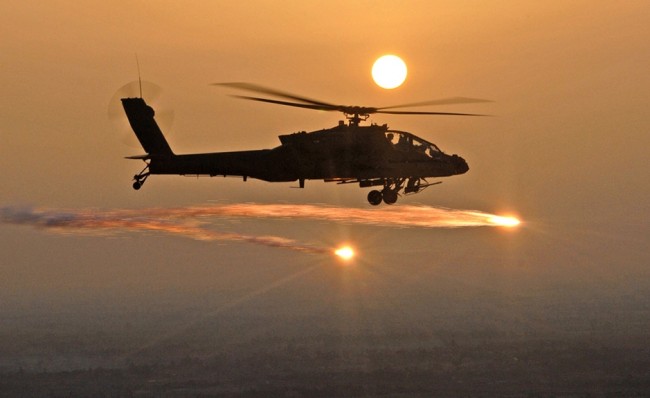 Apache helicopters might be seen over Iraq soon.  The United States Senate is toying with the idea to favorably answer a request to provide attack helicopters to Iraq, the Economic Times reported this morning.  Iraq, which has lost the key town of Fallujah to al Qaeda, sent the request through diplomatic channels in an effort to get assistance in keeping the terrorist group from seizing the entire western province of Anbar.

The Senate Foreign Relations Committee, headed by Robert Menendez, is considering the open support of leasing and selling dozens of Apache attack helicopters to the Iraqi government.  But there are some concerns among committee members.

Chief among the committee’s concerns is the possibility that Iraqi Prime Minister Nouri al-Maliki, a Shi’ite, will turn the Apache helicopter against his political opponents, the Sunnis.  A collateral concern is the question of Iraq sending military assistance to Syrian President Bashar al-Assad.

US House of Representatives Speaker John Boehner has been pressuring the Obama administration to provide some type of support to Iraq.  Boehner, though, has stopped just short pushing Obama to return troops to the embattled country.

In the 24 months since American troops were pulled out of Iraq, the US has been sending weapons on a regular schedule.  Currently, America is stepping up efforts to make shipments of missiles, surveillance aircraft and other military supplies go through the supply pipeline faster.

In October 2013, just prior to Maliki’s highly-publicized visit to Washington, leading Senators told Obama that they expect Maliki to do more to reach out to his opponents.  While Obama has recently spoken very little publicly about the latest developments in Iraq, the State Department has been busy.

A Deputy Secretary of State, Bill Burns, called Menendez to assure him that the State Department is working diligently to meet the committee’s demands for assurances.  The State Department is doing everything it can to guarantee the Apache helicopters will be ready for delivery when the anticipated approval of the Senate is received.

The Apache helicopter is a twin-engine attack helicopter with a two-man crew.  It comes standard with a group of nose-mounted sensors for identifying targets.  Armed with a 30 millimeter M230 between the main landing gear, it also carries a mixture of missiles and rockets.  Officially designated the AH-64, the vehicle has an enormous about of redundancy built into its systems to help it survive during combat.

The Apache was developed as a replacement for the AH-1 Cobra, the workhorse of the US military in Vietnam.  The Apache prototype was first flown in September 1975 and was later selected in 1976 for full production to start in 1982.

In addition to the US Army, the Apache has become the primary attack chopper for countries including Greece, Japan, Israel and the Netherlands.

Al-Maliki has often discussed the fighting and combat in Ramadi and Fallujah as being a struggle against al Qaeda.  But there is more under the surface that won’t be seen by the casual follower of Middle Eastern events.

The Sunni have long felt that they were being ground down by a sectarian government.  Blocked from helping to run their own country and being left out in the sharing of increasing oil revenues, the Sunni and their grievances won’t be going anywhere soon.

While the American government says that it won’t be putting boots back on the ground, it’s not a fight that will be won militarily.  Sunnis, who used to run the country and now have been pushed into the background, say they want to be in the system that was meant to be inclusive.  Apache helicopters can’t make the system work by force, so people are wondering how the Iraqi system can be made inclusive by force.

2 Responses to "Apache Helicopters from America Back Over Iraq"