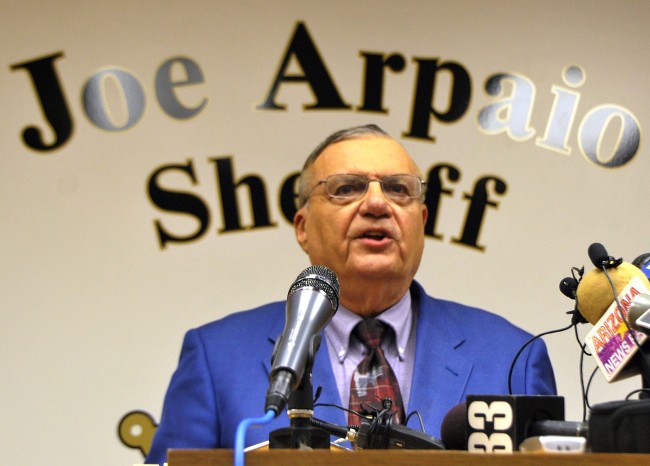 Arizona Sheriff Arpaio has ordered bread and water to be served to 38 inmates of the Maricopa County jail facilities during the period of one week. The punitive diet came as a result of insubordination rendered unto the nation’s flag placed within the cells of the federal institution. Reportedly the prisoners defiled the American flag by tearing, trampling, discarding, and writing commentary directly upon the property of the government. The American flags were situated in the cells as part of a project to instil patriotic sentiment in prisoners. Combining the visual measures further with audio experiences, the inmates are subjected to the “Star Spangled Banner” after rising and “God Bless America” before retiring. Billed as the American flag jailhouse initiative, the measures were brought into action in November of 2013.

A prolonged diet of bread and water can potentially lead to side effects such as reduced testosterone levels, damage to the eyes and bones, an inability to heal surface wounds, added risk of infections, and weight loss. However the prisoner’s menu that Arizona Sheriff Arpaio ordered consisted of bread and water that included extra nutritional value in the form of dairy powder and pureed fruits and vegetables.  It was announced that recipients of the regimen will be given the meal for seven consecutive days and cutlery will not accompany the meals.

This is far from the first time that Arizona Sheriff Arpaio has attracted news attention. In 2013, he was challenged in a court of law over his practice of obliging prisoners to wear pink underwear. Gathering popularity with his get tough measures and prison reforms, he founded a website to promote his public persona and sell pink items.  Not only does the website cater to the demands of pink underwear, but other items are for sale including pink handcuffs and baseball caps.

Arizona Sheriff Arpaio is proud to be a United States veteran and makes a point of employing a reported 600 American veterans within the Maricopa County jail system.  In 2012, he was re-elected sheriff for the sixth time.  His popularity is based on his hard-line tactics such as removing salt and pepper from the prisoners’ meals to economize on the high price of retaining prisoners within the United States federal system.  Boosting that a jailhouse meal costs between 15 and 35 cents per head, Sheriff Arpaio’s tactic is to make the prisoners as uncomfortable as the law permits.  His detractors include Amnesty International, which investigated the facility known as Tent City, calling it inhumane. The infamous open air jail houses more than 2,000 inmates; the temperatures in Phoenix, AZ, can rise to 125 degrees, and on one occasion during a heat wave in July of 2003, the temperature reached 138 degrees.

For inmates who have the luxury of a cell within the Maricopa County jail facilities, the clear warning has come not to defile the decor, the American flag. This will only give cause for Arizona Sheriff Arpaio to order more bread and water in 2014.