By Daniel Worku on January 20, 2014Comments Off on Australian Open: Federer Cruises Past Tsonga 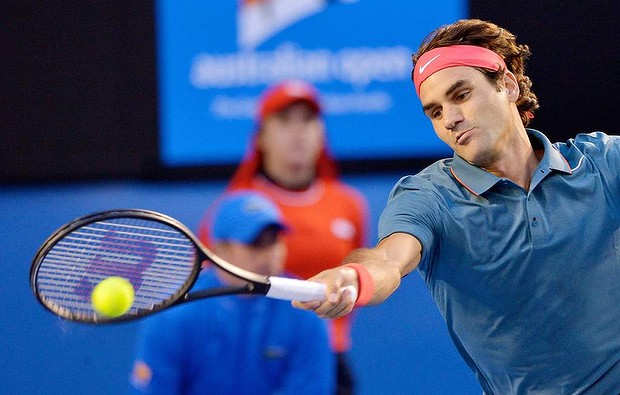 Australian Open fans were hopeful for a knock-down drag out thriller, as has occasionally been seen in the past between Federer and Tsonga, however Federer cruised past Tsonga in straight sets (6-3, 7-5, 6-4) looking strong and in control throughout. Melbourne has seen quite a few epic matches under the lights during the first major tournament of the gregorian calendar year. Federer refused to allow for another one in this years fourth round match he played against Tsonga however.

In previous years it had appeared as though the frenchman Tsonga had been gaining ground against Federer. The Swiss looked to be losing his edge as challengers like Tsonga were more often able to push him around, dictate play, and even cash in on more than the occasional upset win. Armed with a new racquet at this years Australian Open, along with a new coach, Federer looked to be reversing the trend. In his straight sets victory, the Swiss controlled the court, approached aggressively, rattled off winners, and moved well throughout the match.

Australian Open fans seemed to be caught between two minds. One the one side spectators were pleased to see Federer move on to the quarters, and on the other hand disappointed not to get at least another set of quality tennis. Federer, surely willing to see a straights sets victory in contrast to an extended battle, unapologetically dismissed the Frenchman in style. In the end, Australian Open fans watched as Federer cruised past Tsonga, and tennis lovers now await the quarterfinal match between Federer and Murray.

Federer and Murray met in the final of the Australian Open two years ago. The result then, was that the Swiss would cruise to a two set lead before Murray, having not won a major at that point, found his game and nearly took a hard fought third set. Murray is now a different player however, bolstered by a level of belief that he did not previously possess. Similarly, Federer, armed with his new racquet and coach, appears to be more confident and free-swinging than in he has been recently.

The Federer Murray matchup is sure to be one that Australian Open fans are looking forward to after seeing the Swiss cruise past Tsonga in straight sets.