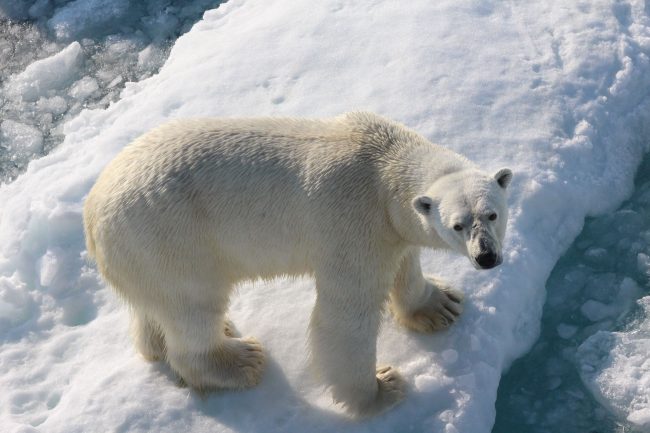 A new three-part study has shown a shift in polar bear (Ursus maritimus) dietary habits, in response to an increase in sea ice melting. The study investigated the prey that polar bears targeted, as they adapted to surviving in an ever-changing environment.

Polar bears have now made it into the list of threatened species on the U.S. Endangered Species Act, and are described as “vulnerable” on the International Union for Conservation of Nature and Natural Resources’ Red List of Threatened Species. Although polar bears are specialist seal pup hunters, it has recently been suggested the creatures can exploit terrestrial food sources, as well.

The research papers were recently published by scientists working at the American Museum of Natural History, exploring the alternative food sources that polar bears, among the western Hudson Bay population, resorted to consuming. The study suggests that polar bears are employing novel foraging strategies on land, switching to hunt different prey and consuming a combination of vegetation and animal life.

Polar bears typically tend to gain the bulk of their annual fat reserves by hunting seal pups, and then move to shore for the summer period. With each passing year, as the Arctic sea ice begins to melt earlier, and freezes later, the polar bears are struggling to hunt traditional prey within the limited timeframe available. With the apparent shift in climate conditions, polar bears now have less time to hunt down ringed seal pups, and have been forced to adapt to spending extra time hunting on land.

Robert Rockwell, a researcher in the American Museum of Natural History’s Department of Ornithology, indicates that polar bears are much more resilient to global climate change than previously conjectured:

“There is little doubt that polar bears are very susceptible as global climate change continues to drastically alter the landscape of the northern polar regions… But we’re finding that they might be more resilient than is commonly thought.”

Rockwell teamed up with Linda Gormezano – a postdoc researcher based in the Museum’s Division of Vertebrate Zoology – to study how polar bears might adapt to the energy-deficits presented by a shortened hunting period, caused by melting ice habitats.

The first paper was published in the journal Polar Ecology, during the spring of 2013. The researchers filmed recordings of polar bears hunting, catching and consuming populations of lesser snow geese (C. c. caerulescens) during the mid to late summer period. The polar bears seized the opportunity to hunt the snow geese, while they were replacing their primary flight feathers.

Another paper, published in the journal Ecology and Evolution, demonstrated a change in some of the polar bears’ diets, based upon investigation of bear droppings. Using the scat, the authors maintain that the polar bear diet has shifted significantly over the last 40 years. The researchers found evidence to suggest that polar bears were preying on caribou (Rangifer tarandus) – a species of deer native to Arctic and Subarctic regions – as well as snow geese and their eggs.

Finally, during the last research paper, published in the journal BMC Ecology, the study authors established that polar bears possessed an omnivorous diet. Looking at the presence of local vegetation collected from samples of scat, the authors conclude that the polar bears are sticking to particular habitat types; they theorize that polar bears are remaining in particular regions to drive energy expenditures down to a minimum, as a result of the reduced availability of conventional prey.

In assimilating the knowledge from each of the studies, researchers believe polar bears are starting to adapt to changes in their environments by implementing “flexible foraging behavior.” In attempting to explain how polar bears are capable of shifting their hunting practices and dietary intake, this change in strategy has been attributed to the genetic heritage that exists between polar bears and brown bears; polar bears are said to have separated from brown bears some 600,000 years ago.

In summarizing, Gormezano posits the adaptation of polar bears’ foraging tactics, in response to “climate-induced reduction of sea ice,” will need to keep up with environmental changes and ensure polar bear numbers persist.