Game of Thrones Season 4: Things to Expect This Season

By Alexandria Ingham on January 13, 20142 Comments 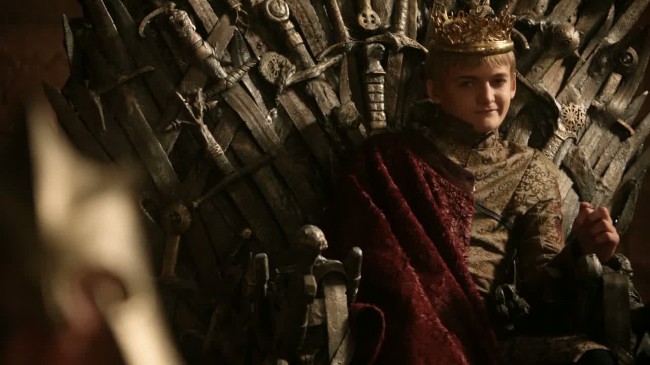 The new Game of Thrones trailer has been released, and it was an instant hit. It gives a hint towards a few of the things that will happen during the season. However, there are a few things that fans of the book series that Games of Thrones was adapted from will expect from season four.

As a word of caution, for those who have not read the books, there are some spoilers.

1. The Death of King Joffrey

Those who have read the books will already know that Joffrey does not get away with his actions for too much longer. The young sociopathic king will likely see the end during this season, since the clips show his marriage to Margaery Tyrell. Thinking he is drinking a glass of wine, Joffrey will get a mouthful of poison.

Some may feel sorry for Margaery. All she really wanted was to be Queen but it lasted all of five minutes.

There seem to be very few Starks left, and they are all separated except for the two youngest boys. Poor Sansa has been kept locked away at King’s Landing since her father’s betrayal, and has not had the best of times there. Joffrey is adamant that he will make her life a living hell. With Tyrion Lannister locked in jail according to the trailer, there are questions surrounding Sansa’s safety.

If the show continues to follow the books, as it has been doing so far, Sansa will not be kept in King’s Landing much longer. It seems that her escape with Littlefinger is one of the things to expect during season four of Game of Thrones.

Jon Snow managed to escape back to The Wall at the end of season 3, and the trailers show promise that the aftermath and war with the Wildings is coming. There are a few other questions and expectations surrounding the story, though. One of those is Snow and the fact that he broke his vow by fraternizing with the enemy. While it may have been with an ulterior motive, the Night’s Watch do not take breaking the vow lightly.

There is also the fact that Bran Stark has now ventured into the unknown beyond the wall in the search for the three-eyed raven. There was no sign of him in the recent trailer, so nothing to give away how this will play out and whether it is a storyline the writers have chosen to keep for closer to the end.

4. The Greyjoys and Roose Balton

Roose Balton is now the Warden of the North, but there is the aftermath of the Red Wedding. There will be plenty of former Stark supporters against the man who betrayed their King in the North, Robb Stark. There is also the part with his son, who is slowly torturing and stripping Theon Greyjoy of his identity.

This season of Game of Thrones shows promise for the young Greyjoy as his sister betrays her father to go and save her little brother. Will she get there in time and will the men she has with her be enough to save Theon?

The writers have made it clear that the events of the book will not necessarily happen in the same order in the TV show. However, the important details will not be missed. The above are things people expect to see in season four of Game of Thrones, but the question is whether they will be saved for later.

2 Responses to "Game of Thrones Season 4: Things to Expect This Season"