Grammy Weddings An ‘All Out Assault on Traditional Family’? 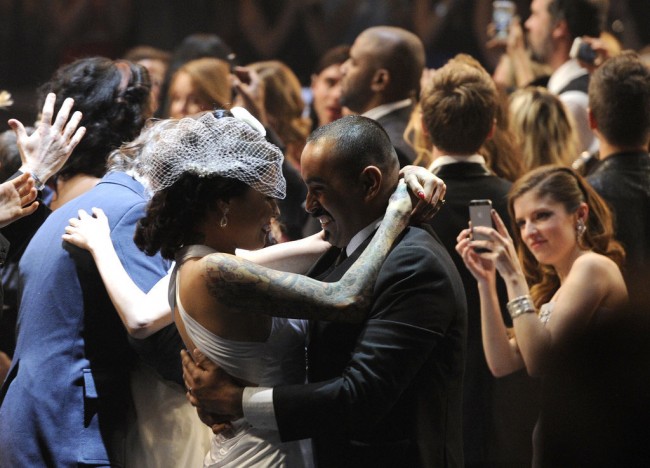 Kirk Cameron has called the wedding ceremonies that took place at the Grammys “an all-out assault on traditional family.” He posted the declaration on both his Facebook page and Twitter, although the Facebook posting was later removed. Luckily, computers have a thing called a screen shot, so proof of his statement was easily captured.

Cameron has been increasingly saying negative things about gay marriage. Last year he called it “destructive,” “unnatural” and “detrimental.” His exact words about the Grammy ceremony this year were “How did you like the Grammys (sic) all-out assault on the traditional family? The lines were drawn thick and dark. Now more than ever, we must work together to create the world we want for our children.” He then went on to pitch his new movie, Mercy Rule saying it would strengthen families. He also posted a link at the bottom for people to purchase his film.

The wedding ceremonies at the Grammys were no more an assault on traditional marriage than peanut butter is an assault on chicken cordon bleu. The two are not related to each other besides the fact that they are both food. One does not affect the other in any way, shape or form. No one is forcing anyone else to eat peanut butter; and chicken cordon bleu would be whistling up the wrong tree if it should accuse peanut butter of partaking in assault just for existing.

Similarly, gay marriage does not affect Cameron except for the fact that he is extraordinarily annoying when he parades around the media denigrating gay marriage in order to promote himself. Why does Cameron care so very much about gay marriage? What does it have to do with his life?

Gay marriage affects Cameron’s life exactly as much as Cameron’s private bedroom activities affect everyone else in the United States except his wife. Cameron seems almost obsessed with the issue, which brings serious questions to the forefront about his own sexuality.

Studies have shown that the more homophobic a man is, the more likely he is to be sexually aroused by images of two men engaging in sexual activity. In a study entitled Is Homophobia Associated with Homosexual Arousal? researchers found that out of the group of study participants “…the homophobic men showed an increase in penile erection to male homosexual stimuli.”

That study supports additional research that has shown homophobia is a strong indicator of repressed homosexual feelings. Given the established wisdom in this area, is it possible that Cameron himself possesses repressed homosexual urges and his acting out against gay marriage is just a symptom of his own struggle with sexuality? Based on the data, this is not an unreasonable question to pose.

Were the Grammy weddings an all-out assault on traditional family? Definitely not, but Cameron’s homophobia would be more easily understood as his way of dealing his own confused sexuality. If Cameron is 100% straight, that means his remarks on gay marriage are just 100% stupid.

One Response to "Grammy Weddings An ‘All Out Assault on Traditional Family’?"