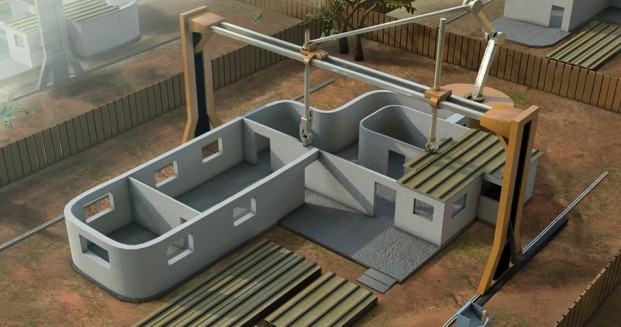 The newest technology that will change human society in the most profound ways is 3D printing and, in the not too distant future, even houses may be printed – not just here on Earth but possibly even on the Moon or Mars. Thanks to a recently developed technology called contour crafting, it could soon be possible to erect a larger-than 2000 sq. ft. in less than a day, using no human labor. NASA is already exploring the concept of using contour crafting to construct habitations on the Moon and perhaps even on Mars.

3D printing is not a new idea; the printers are already available for purchase in various sizes. Numerous items and machine components have already been manufactured by such machines. A Dutch company began work on the world’s first printed house in Holland in the early part of last year. That project is not yet complete but the inventor of contour crafting technology, Dr. Behrokh Khoshnevis, Director of the Manufacturing Engineering Graduate Program at the University of Southern California, says that the goal is to be able to construct a whole house in one operation, taking less than 24 hours.

Speaking at conference hosted by the non-profit Technology, Education, Design (TED), Khoshnevis discussed the implications of houses built with his technology. He described current building construction as “generally slow, they are labor-intensive and inefficient…” He also pointed out that the current methods of construction are hazardous, prone to corruption, costly and always over budget. He went on to say that the new technique would be used to construct entire neighborhoods “that are dignified; at a fraction of the cost; at a fraction of the time…” In addition, he explained that the printed houses would not necessarily look the same; slight modifications to the CAD (Computer Aided Design) files, from which the giant printers would work, merely needed to be slightly modified to produce different structural design – even to the extent of curved walls.

Construction is carried out by a machine mounted on enormous tracks, similar to cranes that are used to load cargo ships. A long nozzle is suspended from the center of the machine’s gantry and concrete is then dispensed from the nozzle, building the walls layer by layer. Robotic arms will perform a variety of other related tasks: Plumbing and electrical wiring can be installed during the same process, in addition to decorated work, such as paining and laying tile. The machine will not only pour concrete but also reinforce the building’s walls as it builds.

The implication is that, not only could some of the world’s most impoverished slums be replaced with clean, safe, comfortable dwellings, but also that house-hunters could have their new home designed in a CAD file and then see it constructed within days – human tradesmen would install windows and doors, once the construction was complete.

As well as revolutionizing the construction industry and real estate business, contour crafting has, quite literally, an otherworldly application: Not only could the earthly houses of the future be printed, but these huge 3D printers could be transported to the Moon, or even to Mars, and used to construct habitations there too. On the NASA website, Dr. Khoshnevis writes that contour crafting could be employed – along with other technologies – to construct an entire “Lunar Settlement Infrastructure.”

Addressing concerns that this new technology may eventually lead to massive job losses within the construction industry, the Doctor points out that it’s eventual widespread adoption would, in fact, create many new, safer jobs in the construction business. This method of construction would reduce emissions and – because it removes the dangers of manual construction – would open up employment opportunities to those who would, for physical reasons, not be able to work in construction.

The potential benefits to society are seen as exciting, far-reaching and of great benefit. The printed houses of the future may be constructed at a greatly reduced cost and in much less time. Mankind’s aspirations to colonize the Moon and other planets may also be one step closer to reality.