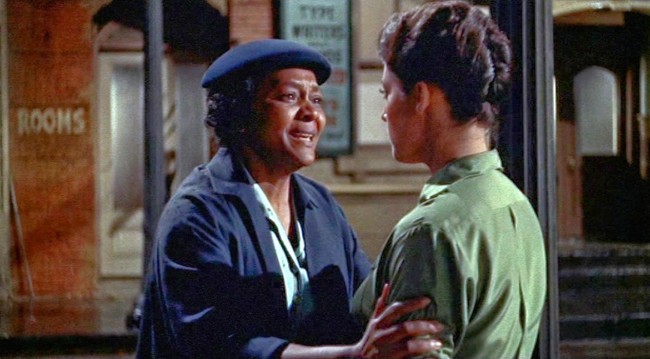 The star of the groundbreaking 1959 movie Imitation of Life, Juanita Moore, has passed away at the age of 99 in Los Angeles. The news was confirmed by the legendary actress’s grandson Kirk Kahn who told Variety that the sad news was indeed true.

Moore was an acclaimed Hollywood actress who, like many African American actors and actresses in the 30s and 40s was forced to play mainly maids who served as background text in films about white husbands and wives. Everything changed for Moore after she landed the role of Annie Johnson in a remake of the film Imitation of Life.

The film was an adaptation of the novel of the same name by Fannie Hurst.

Moore’s portrayal of Annie Johnson was sweeping and bittersweet. Johnson is a black woman, who works as a housekeeper and one day finds and takes care of an abandoned white child. One of the films pinnacle scenes occurs when Annie Johnson and the white child, Susie, get into a confrontation and Susie leaves to go to school in Denver, Colorado. Johnson later passes away from what can be thematically interpreted as a broken heart.

Although Moore was proud to be nominated, she never saw it as a career defining move. “The Oscar prestige was fine, but I worked more before I was nominated,” she said in an interview.

The film was a big success and was a strong critique of racial issues in late 1940s America which made strong parallels to the current age within which the film was released. Moore and Susan Kohner, who plays the adopted daughter, both received Academy Award nominations at a time when there had only been one black woman to have ever won an Oscar. There had only been five black women before her to have been nominated.

A star in Imitation of Life, Juanita Moore would continue to work in Hollywood or as a part of the acting circle until her death at the age of 99. Moore also starred in Disney the Kid and appeared in television shows such as Dragnet, Marcus Welby, ER and Judging Amy.

Moore was married to Charles Burris until his death in 2001. They were married for 50 years. Her grandson Kirk Kahn is also a part of the movie business being an actor and a producer himself. Kahn is also the CEO of the “Cambridge Players – Next Generation.”

Kahn said that Moore, “gave back to her community in so many ways. Wherever she went she stopped and told Black boys and girls they could do anything with their lives.”

Moore was also extremely active up to her death from natural causes. Moore was scheduled to make a performance at L.A.’s Saban Center in a few weeks where she would be taking place in a stage reading. Moore had been practicing lines only a few days before her death on January 1, 2014.

Moore’s death at 99 years old is sad news, but the actress will long be remembered for her remarkable performance in the movie that made her famous and earned her an Oscar nomination and a Golden Globe nomination, Imitation of Life.