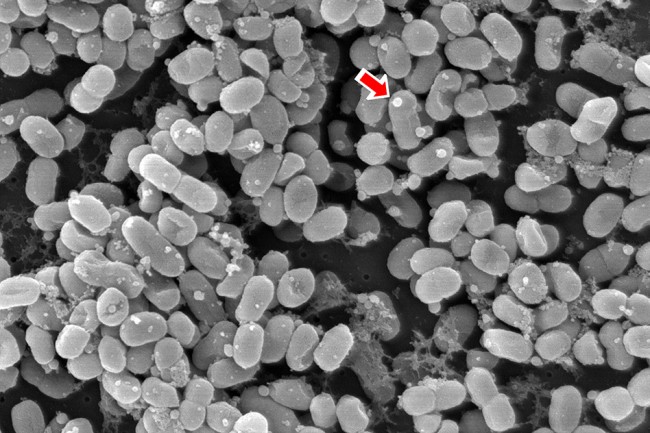 Scientists have recently discovered and documented the first extracellular, DNA-containing vesicles shed by ocean microbes. The marine cyanobacteria – photosynthesizing, prokaryotic bacteria that are ubiquitous to most terrestrial and aquatic habitats – are involved in Earth’s biogeochemical and nutrient cycles. During photosynthesis, the bacteria harness sunlight to convert light energy into chemical energy, using carbon dioxide and water and releasing molecular oxygen as a byproduct. Essentially, they provide a source of nourishment for other organisms, constituting an edible form of biomass.

Scientists at the Massachusetts Institute of Technology (MIT) have discovered another potential role of cyanobacteria. They have confirmed that the bacteria manufacture and release tiny spherical packages containing a host of substances, including genetic material – which can be transferred via horizontal gene transfer – and nutrients.

The latest research was published by post doctorate researcher Steven Biller and Professor Sallie Chisholm, along with their co-authors, in the journal Science. The afore-mentioned vesicles were identified in two different types of cyanobacteria – Prochlorococcus and Synechococcus.

Prochlorococcus is a genus of remarkably small bacteria, less than a micrometer in length, that was discovered over 20 years ago. As the smallest known photosynthetic organism, Prochlorococcus is conjectured to be one of the most abundant photosynthesizing bacteria, surviving along the oceanic surface and to depths of 200 meters. Meanwhile, Synechococcus thrives in oligotrophic environments, and are capable of surviving in conditions where nutrient levels are scant; however, the bacteria remain confined to salt water and are more abundant in nutrient-rich areas.

When scrutinizing the bacteria a little closer, the researchers identified a series of vesicles that were just 100 nanometers in diameter, suspended in the cyanobacteria cultures. Similarly, this observation was also made in seawater samples that had been gathered from the nutrient-rich coast of New England and the nutrient- bereft waters of the Sargasso Sea, situated in the middle of the North Atlantic Ocean.

Biller calls for further research to be conducted into these vesicles, so the scientific community might better understand their nature and function, before going on to tentatively posit their role in disseminating DNA and other organic material:

“Vesicles are a previously unrecognized and unexplored component of the dissolved organic carbon in marine ecosystems, and they could prove to be an important vehicle for genetic and biogeochemical exchange in the oceans.”

Following metagenomic analysis of the vesicles’ contents, from seawater samples, Biller and colleagues found DNA that originated from a diverse range of bacteria; the authors believe, on this basis, that vesicle production and release is relatively common among marine cyanobacteria.

The team approximated the global production of vesicles from Prochlorococcus to be around a billion billion billion each day, contributing considerable amounts of carbon to – what they describe as – the “… scarce nutrient pool of the open seas”.

Additional laboratory investigation demonstrated that the vesicles were stable and could endure for two weeks, or longer. It’s possible that the sheer number of vesicles released could provide sufficient nutrients to sustain the growth of nonphotosynthetic bacteria.

When studying the vesicles using electron microscopy (EM), the researchers made another intriguing discovery. Affixed to the small, DNA-containing packets were bacteria-attacking viruses, called bacteriophages (a.k.a. phages). These viruses insert their genome into the cytoplasm of the bacteria and use the host’s own cellular machinery for replicating new virions.

Biller indicates that, once a phage has injected its DNA into a vesicle, the phage is then entirely inactive. Equating the vesicles to the countermeasures deployed by fighter jets to ward off missile attacks, Biller suggests that the vesicles could help nullify the deadly threat from phages.

The vesicles were originally discovered by graduate student Anne Thompson, back in 2008. Thompson observed small blebs protruding from the surface of the bacteria, during high resolution EM analysis, and shared her remarkable findings with Chisholm, who works in MIT’s Department of Civil and Environmental Engineering and Department of Biology. Once Biller came aboard, the researchers found that the marine cyanobacteria shed billions of these small blebs, which they eventually identified as DNA-containing vesicles.

As of yet, however, the mechanisms by which these vesicles are created remains poorly understood. In addition, the researchers are uncertain as to how they come to contain genetic material.

Having already dedicated three years to the latest study, Biller and colleagues plan to continue researching these tiny vesicles in further detail; however, they suggest it could take up to another five years before they gain a more definitive understanding.