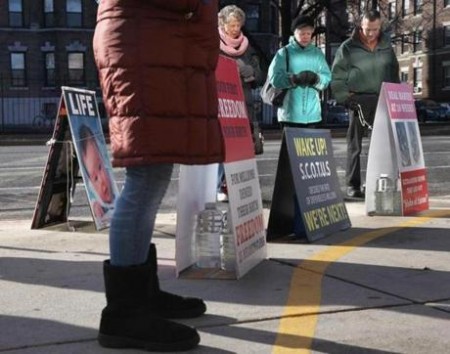 In a case where first amendment rights clash with the rights of citizens to operate a business, the Supreme Court will decide whether or not Massachusetts’ “Buffer Zone” law for abortion clinics is constitutional. The law which stipulates that protests around abortion clinics must be at least 35 feet away from the building is at the center of controversy after opponents to the law say it restricts first amendment rights based on the “content” of the speech.

Dana Cody, an attorney and executive director Life Legal Defense Foundation, says that the law specifically targets free speech rights of innocent people, as well as anti-abortion speech. She went on to say that the law is promoting “content-based discrimination,”

The Life Legal Defense Foundation is an organization that defends anti-abortion activists. Dana Cody said that retroactive policies, such as arresting people after they have committed an offense while protesting, should suffice in addressing public safety concerns.

The first “buffer zone” law passed by Massachusetts in 2000 created an “18 foot ‘floating’ buffer zone” around any patron walking into an abortion clinic. This law sought to protect individuals from mobs of anti-abortion protesters following an incident in 1994, where a shooting resulted in the death of two clinic employees.

Not known for their mild-mannered behavior, anti-abortion activists have resorted to extra legal methods to have their message heard, blocking patients from accessing parking garages, throwing literature at them, and even filming and touching patients as they enter facilities. Supporters of the “buffer zone” laws say it will help protect patients from such conduct.

The 35 foot “buffer zone” law passed in 2007 tried to address this issue by increasing the scope and size of private space for individuals, as well as the space around entrances and driveways of abortion clinics.

Supporters argue that while first amendment rights should always be respected, the need for protecting the physical safety of abortion clinics and their patients outweighs free speech rights.

A U.S. District Court upheld the law, saying that the “buffer zone” law was “content-neutral” and did not affect the fundamental free speech rights of citizens. The court argued in order for their to be a violation of free speech rights, there must be a “restriction on the time, place or manner of speech,” which the law does not infringe upon.

Other places where there are such “buffer zones” include polling places, where political protests, literature dropping and filming isn’t allowed within a certain range of the ballot boxes.

The court argued that the “buffer zone” law is in effect as restrictive of free speech rights as these other areas of ‘no-protest’, and are in fact constitutional.

Still opponents to the law say it unfairly targets anti-abortion speech and that the law does not allow for “alternative means” of communication. Other opponents say that the law could create an ugly precedent, allowing for the further restriction of other political protests outside of other places of business such as factories or laboratories.

In 2000 the Supreme Court decision upheld an 8-foot “floating buzzer zone” in Colorado, and analysts say the Supreme Court may be likely to rule in favor of the “buffer zone” law for abortion clinics in Massachusetts.