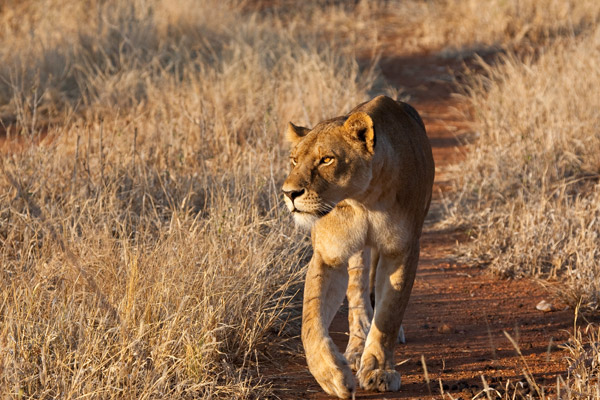 According to a recent study in the journal Science, over 75 percent of Earth’s big carnivores are suffering major declines in their numbers that could result in their extinction unless efforts are taken to preserve them. These animals include bears, dingoes, wolves, and lions. Humans are behind many of the reasons for the startling decline in the numbers of large carnivores.

Humans have placed pressure on the dwindling populations of these carnivores by their intrusive activities, such as the slashing and burning of the habitat of the animals to grow more crops. Also, the loss of the prey that the big carnivores depend on, due to hunting by humans and loss of their habitat, has decreased the available food supply for the carnivores.

Yet another negative influence that humans have had on the numbers of big carnivores left is that humans often persecute these animals, saying that they are harmful to their livestock or that they are mankillers.

For instance, farmers sometimes trap or shoot coyotes on sight, considering them to be a threat to their livelihoods, and some ranchers and farmers have the same attitude about wolves. In places like Africa, farmers often feel the same way about lions, that they are a potential danger to their herds of cattle or goats.

The authors of the study reviewed over 100 published studies in their efforts to present an accurate assessment of both the dwindling numbers of big carnivores existing in the world today, and the impacts on the ecosystems and economies of the countries they inhabit.

The lead author of the study, Professor William Ripple from Oregon State University, stated that the effect of these factors worldwide is that “we are losing our large carnivores.”

The loss of big carnivores negatively impacts the ecosystem

The loss of the world’s big carnivores has already begun to have negative impacts on ecosystems around the globe. According to the researchers who wrote the study, 31 big carnivores are facing increasing pressures to their populations in southern and East Africa, the Amazon, and South East Asia.

According to Professor Ripple, these animals “are at risk of extinction, either locally or globally.”

Fewer numbers of cougars and wolves in Yellowstone National Park, the researchers noted, led to an increase in the numbers of browsing animals there, like deer and elk.

This increase in browsing animals proved to be disastrous for vegetation, as well as being disruptive to the lives of birds and small mammals that depend on the vegetation and undergrowth. The loss of ground cover also leads to more rapid erosion of soil and desertification of ecosystems.

The resultant increases in browsing animals globally has had similar effects in other countries where the populations of big carnivores are in the decline.

In Africa, the burgeoning population numbers of olive baboons, linked to the declining populations of leopards and lions, are causing a more significant threat to livestock and farm crops than even elephants.

Lion populations in Africa have declined due to factors such as loss of habitat and slaughtering them in the name of defending the lives of humans and livestock.

It can be difficult for humans to get beyond the knowledge that big carnivores have, at times, preyed on man when the opportunity has presented itself, or when the carnivores have grown too old, sick, or slow to prey upon faster animals.

Also, farmers and ranchers often regard their livestock as being far more important than the lives of big carnivores that prey upon them.

In some countries, like those of Asia, organs of big carnivores like tigers and bears are used in traditional medicines that are harvested, processed, and sold to men who have the mistaken belief that such “medicine” will increase their virality and strength.

However, according to the authors of the study, people need to realize that big carnivores play an important and complex role at maintaining the natural balance between themselves and prey animals.

Big carnivores are worth more, in economic terms, alive than they are dead. Humans aren’t nearly as good at replicating the role that big carnivores play at thinning the populations of browsing animals and maintaining the delicate balance of the world’s ecosystems.

What are some of the services of value that big carnivores provide?

Big carnivores provide many examples of what the recent study calls “services of value.” Examples include their roles in disease control, carbon sequestration, and biodiversity.

There are some positive signs that humans are recognizing the important roles that big carnivores play in maintaining the natural balance of Earth’s delicate ecosystems.

For instance, the re-introduction of wolves into Yellowstone improved the ecosystem there fairly rapidly. The wolves have also led to an influx of tourist dollars into the economy, bringing in tens of millions of dollars in revenue.

While Professor Ripple acknowledges this, saying how he was “impressed with how resilient the Yellowstone ecosystem is,” he and the other authors of the study argue that an international initiative is necessary to conserve the swindling numbers of big carnivores left in the world.

The authors of the study point to the efforts of groups like the Large Carnivore Initiative for Europe (which has an affiliation with the International Union for the Conservation of Nature [IUCN]) as being a sort of role model in the efforts to protect and conserve big carnivore species.

With over three-fourths of the big carnivores in the world facing possible extinction, increased efforts must be implemented in order to preserve these species. Their extinction could have disastrous economic and environmental effects. Ensuring their continued existence will also help preserve the biodiversity of the planet.

5 Responses to "Over 75 Percent of Big Carnivores Facing Extinction"