By Michael Smith on January 28, 2014Comments Off on Quentin Tarantino Sues Gawker ANONFILES for The Hateful Eight Leak 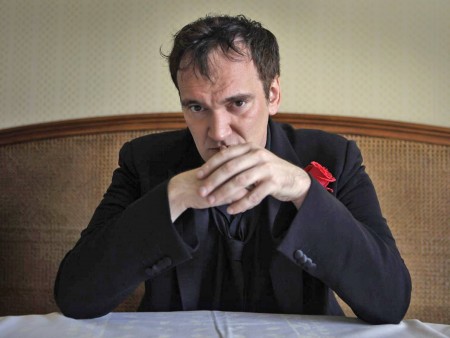 To paraphrase the 1976 film Network, Quentin Tarantino is mad as hell and he isn’t going to take it anymore; in fact, he has sued Gawker and ANONFILES.COM for The Hateful Eight leak. The Django Unchained director/producer is asking for $2 million in damages over the script’s publication by the website, which specializes in celebrity gossip and the anonymous website – ANONFILES – that Gawker led its readers to so they could read the 146 page draft screenplay.

Last week, Tarantino went wild after finding that one of six people to whom he had given copies of his first draft screenplay for another western he was planning to shoot next year, had leaked the script. At the time, the director said that he was upset and depressed at what he saw as a direct betrayal of trust. Unfortunately, when he gave the draft copies out, three of the six people were agents and it appears that one of these started showing the script to other actors and interested parties.

The Pulp Fiction director has accused Gawker of indulging in “predatory” journalism and in his lawsuit he claims that there is nothing “newsworthy” about the gossip website. Gawker, however, are saying that they have done nothing wrong. They have accused Tarantino of deliberately blowing the whole thing out of proportion. They maintain that they did not leak the script, but, merely directed their readers to the site which featured the screenplay.

The site has stated they did not put the script on ANONFILES nor did they put the script on another site called Scribd. Apparently they received a tip from a reader about the script’s presence online. The website has said that they will be fighting the lawsuit. Tarantino is suing both Gawker and ANONFILES for leaking The Hateful Eight draft script even though he is not planning on releasing the film any time in the near future.

During the director’s rage filled rant last week, he revealed that he would probably publish the script in book form, but, he may still make the film but not as originally planned, or he could shelf the film permanently. Tarantino was furious about the leak and he demanded, via the press, that someone needed to give him some names. As well as being depressed, he was upset that he could not, apparently, trust six people. He pointed out that he had plenty of ideas for new projects and that he would move on to the “next thing.”

Tarantino’s lawyer, Evan Spiegel made a statement for his client explaining that as far as the director/producer was concerned the websites had violated his rights to “make a buck.” The statement goes on to say that Quentin feels they have “gone too far.” The lawsuit alleges that both the sites have violated his publishing copyright by allowing the draft to be down loaded via the Internet.

There will be quite a few celebrity websites watching these events closely to see if the two sites will either successfully fight the lawsuit or if Tarantino wins his case. Despite the counterclaims that the director has blown the entire episode up in order to create publicity, Quentin Tarantino has not answered their allegations and he seems determined to sue both Gawker and ANONFILES.