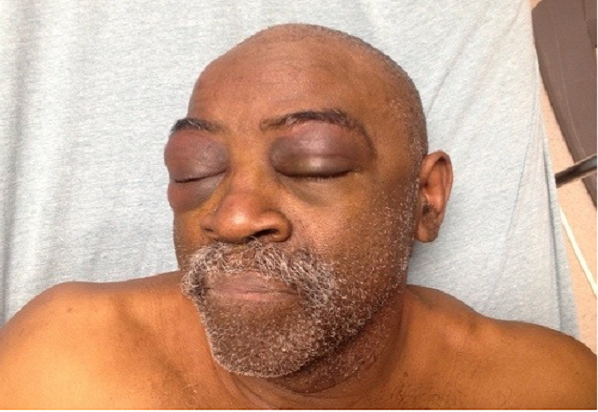 Allegedly an Oklahoma City deaf man was viciously beaten for not hearing State Trooper’s order. Officers beat Pearl Pearson for approximately seven minutes when he pulled over what he thought would be a typical traffic stop.

The 64-year-old  diabetic, who is also deaf, assumed when the officers pulled him over that they would immediately request identification. As soon as Pearson rolled down his window he was met with a punch in face. Not just once but the officers continued to use excessive force against him as they accused him of not obeying their commands.

The fact of Pearson’s hearing deficiency is clearly displayed on his vehicle and on his driver’s license.

Allegedly Pearson was pulled over because earlier he fled the scene of an accident. Not only was accused of resisting two officers, but according to an affidavit Pearson didn’t comply with repeated orders to show his hands after he was pulled over.

Pearson who obviously could not hear what the officers were saying to him was attempting to show his identification but said he was hit in the face instead. He was arrested and later charged for resisting arrest and leaving the scene of an accident. The affidavit did not state whether or not the officers knew that Pearson could not hear their orders. However, it does state that a physical altercation ensued for about seven minutes.

Even though Pearson had a placard which reads, “Driver is deaf” on his driver’s door an interpreter was never provided for him. Reportedly Pearson repeatedly requested an interpreter but he never received one, not during his arrest or time in jail.

Pearson said at the time he didn’t know why he was being arrested and still doesn’t understand why he was beaten so viciously.

Pearson may be deaf but he’s no stranger to the proper way to respond when he’s pulled over by law enforcement; his own son is a police officer. His son-in-law who is now a deputy sheriff was, of course, a police officer at one time as well. Pearson always believed that law enforcement was meant to serve and protect.

Spokesman for the Oklahoma Highway Patrol (OHP), Captain George Brown, said after an internal review of the facts surrounding Pearson’s arrest, Col. Rick Adams, Chief of Patrol, has ordered that the investigation expand their focus in order to see if any violations of the state law occurred. If investigators find that there were violations of the state law or department policy appropriate action will be taken.

As of today no outside complaint regarding this incident had been received by the office of the chief. Also at this time State Troopers Kelton Hayes and Eric Foster remain suspended with pay, pending the outcome of this investigation.

According to Billy Coyle, Pearson’s attorney, his client is completely innocent of the allegations. He says his client is profoundly deaf and was only attempting to give the officers his specialty license when he was attacked.

Sacia Law, Pearson’s neighbor, said Pearson is a kind man and what happened to him had to be the result to a misunderstanding. She said “Officers have dangerous jobs where they put their lives on the line continuously but they can’t yell at Pearson from behind his car and expect a response because his hearing is impaired.” Law said she believes their actions were over the top.

Allegedly on January 3 Pearl Pearson, an Oklahoma City deaf man, was viciously beaten by OHP for not obeying orders that he could not hear. Officers beat the deaf man for approximately seven minutes when he pulled over what he believed to be a simple traffic stop.