Ukraine’s Revolution Appears to be Underway 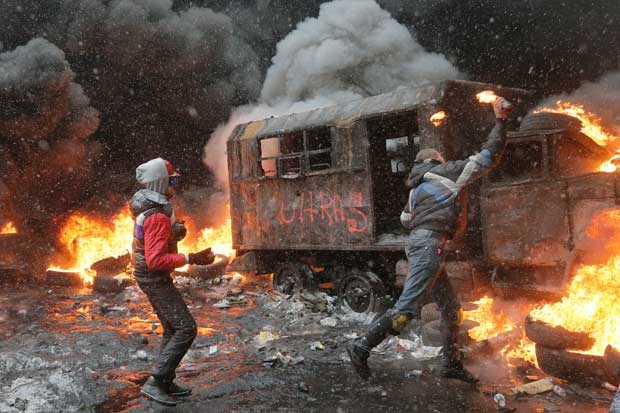 Ukraine’s revolution appears to be underway. It began in November as peaceful protests followed President Viktor Yanukovich’s decision to abandon free trade talks with the European Union in favor of pursuing stronger economic ties with neighboring Russia. Many in Ukraine are unfavorable towards the former Soviet powerhouse, especially after Russia threatened to raise the prices of its energy exports to Ukraine if the deal with the European Union was finalized. Hundreds of thousands subsequently braved harsh winter conditions to continue protesting against what was perceived as their government’s submitting to an unfavorable deal with outrageous preconditions.

A fledgling political opposition emerged, largely headed by the populist figure Vitiali Klitchko, a former heavy weight boxer turned politician. Klitchko gained much support by portraying the government’s policies as contradictory to the will of the people. As the Orthodox holiday season entered its height, tensions on the streets seemed to be subsiding. That was until the Ukrainian Parliament passed unprecedented anti-protest laws that virtually eliminated the right of people to demonstrate their unhappiness with their government.

Protesters have taken back to the streets in defiance of the new laws. Ukraine’s revolution appears to be underway because civil unrest has turned into a full scale battle with security forces and political deadlock has manifested into a breaking of the political structure. As current President Yanukovich calls for calm, his opposition has labeled him a dictator and calls for his departure. Enraged by the first confirmed deaths of Ukraine’s unrest, protesters seem even more determined to lash out against police, often violently, and anarchy reigns supreme in downtown Kiev.

Protests have now spread from Kiev to other regions. Thursday saw perhaps the boldest action yet taken by protesters as they stormed government buildings in Western Ukraine and forced two governors to sign resignation letters. In response, Yanukovich offered a number of concessions including an overhaul of the new protests laws and promised jailed activists would be freed. However, this may be too little, too late.

The opposition has since got the support from many Western countries it hopes Ukraine will further economic ties with. Many member states in the European Union have harshly criticized the government’s response and the escalating police brutality. Numerous videos have surfaced on the internet showing protesters being helplessly beat by security forces and in some cases, even tortured. To further escalate the situation, Russia seems to have sided with the current government while U.S. Secretary of State, John Kerry, speaking at this week’s World Economic Forum, stated his government stands with the Ukrainian people.

On Friday in Kiev, protesters clad in body armor constructed a monumental fortress that seems to be unconquerable without extreme police force, most likely as a provocation. Many in Yanukovich’s administration, especially Prime Minister Mykola Azarov, have condemned such acts as ‘terrorism’ and maintained that such individuals threaten national security. Azarov has adopted a hardliner attitude against the protesters and has noted his government will do whatever necessary to restore order.

With such civil unrest and political turmoil, it seems that Ukraine has crossed the threshold of protests and revolution. On one side, the current government that still holds power has a clear majority in Parliament, constitutional authority, and support from security forces. On the other, a populist opposition has emerged that seems unable to operate in the current political hierarchy. Not only does the opposition have vast support among the population, it has the backing of the very outside power it hopes to one day become a part of, the European Union. Escalating violence and political turmoil have seemingly transformed Ukraine’s Euromaidan protests into the Euromaidan revolution.

2 Responses to "Ukraine’s Revolution Appears to be Underway"