By Kate Henderson on February 12, 2014Comments Off on Almonds ‘Gold Rush’ Under Threat in California

Almond tree farmers have seen a boom time in sales as the health benefits of almonds see worldwide demand soaring, but the drought in California puts it all under threat. So too now do thieves known as “nut-nappers.” A massive 82 percent of all the world’s crop are grown in the Californian sunshine, a virtual “gold rush” for local farmers. An additional ingredient has been lacking for the trees to prosper; rain. The nuts could plummet from being the biggest agricultural export to the biggest loser.  As their value soars, scarcity of supply encourages crime.

Perceptions of almonds, and nuts in general, have changed dramatically over the past twenty years. It used to be assumed that they were bad for us, because of their high fat, and that snacking on nuts was a quick way to put on weight. However, it’s the “good fats” they store, the monounsaturated ones, that are reportedly great for well-being.  They can lower cholesterol and reduce risk of heart disease.  Now that this is properly understood, the demand for almonds has gone sky-high. Many consumers have adopted almond milk into their diets, and other by-products such as almond butter, to increase their intake of the health-giving nibble. In 2011, for example, almond milk sales in the UK went up by 79 percent from the year before.  Despite the fact that they are a lot more expensive than options like potato chips, people seem willing to pay more for a snack that does them good.

Global marketing campaigns have aided and abetted the popularity of the almond. In China, the tag-line “Perpetually feeling good” was used to promote them, and in Britain, they are the “On the go essential snack.” Retailers have also encouraged sales by positioning snack packs of nuts at check-out tills and in easy-to-reach areas, where previously they would have loaded the shelves with chocolate bars and other naughty treats.  In the US, they are “The Crunch That Keeps You in the Game,” and Indian mothers are targeted with the idea that if they feed their children the nuts, they will succeed in life at whatever they choose.

The marketing may not be as misleading as it may appear on the surface. Research consistently shows that almonds are a sensible addition to a good diet.  They have the highest component of protein of any tree-nut and they help keep people feel full and satisfied. What’s more, the “crunch” factor, as favored by the Almond Board of California, is all part of the appeal. Studies prove that people like the crunch and the process of munching up the nuts, or mastication. These were findings from Dr Michelle Wien from the City of Hope National Medical Center in Duarte; results corroborated by many other studies. Wien’s research also suggested that participants on weight loss programs lost a lot more weight when they ate just a handful daily as part of their healthy eating plan.

Dr Wien thinks that almonds could be a valuable tool in the fight against diabetes, owing to their low glycemic index.  Pairing them with a high-glycemic index food, like a piece of fruit, lowers blood sugar rise.

When Wien tried out her theories on patients with pre-diabetes, after 16 weeks, those who ate 2 ounces of almonds per day had improved their “bad cholesterol.” She published this report in the June 2010 Journal of the American College of Nutrition. As a dietician, she indicated that she was pleased to find that such dietary changes could be improving factors in the prevention of disease development. Many of those with pre-diabetes go on to suffer from type 2 diabetes, with both of these conditions expected to be prevalent in half the American population by 2020.

With no reason not to love almonds, the problem in the future could be getting hold of them. Their price has already doubled in the last five years. The only other country with the right conditions to grow them is Australia, which accounts for 5 percent of the world supply, and Spain makes up the final six percent. They need a highly specific climate to thrive. Winters have to be cold, but not too cold, and this allows the trees to close down and go dormant for at least 500 hours.  They then need a mild and gentle spring to wake them up and encourage them to blossom. Romantically, they usually flower by Valentine’s Day, but they won’t do so if the buds get killed off by frost.

The farmers in California, most of them family run businesses that go back for generations, have expanded their growing orchards to meet demand. Many of them have very sophisticated mechanical production methods, and some even use robots to speed up the sorting process.  Speeding up Nature is not so easy. Getting hold of root-stock is a problem, and it can take up to two years to source. Those looking to join the “Gold Rush” cannot just jump on board and plant an orchard.

For those with established and productive orchards, alongside worrying about the lack of rain, they now have a new threat to their livelihoods; the nut-nappers. Almond farmer David Phippen, from central California, lost two trucks piled high with the valuable nut harvest. They were driven off from his facility by thieves. Each truck had a cargo worth $160,000, all processed and ready for export.

Phippen, along with other nut farmers, has had to put a whole new raft of checks in place. He now is forced to document scrupulously. He takes a thumbprint and photographs for every driver. He photographs the license, the truck and the number plate. It is all time-consuming, and represents a breakdown in trust, which saddens Phippen, but he cannot afford to take the risk of his valuable crops being stolen from under his nose. Like the cattle-wranglers of old, where there’s money, there will be those who want to cash in by criminal means. 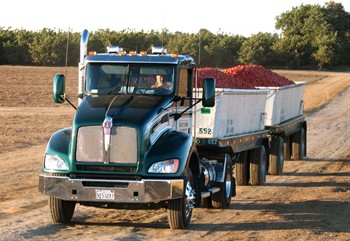 Thanks to modern technology, word can now spread quickly through the almond farming community, when nut-nappers are in the area.  This has led to the capture and prosecution of some of the perpetrators.

While theft is a problem, the Almond Board of California is more worried about water, or lack of it. It’s the worst drought in a century and the reservoir levels are now dangerously low. Phippen, who has been farming almonds all his life, has never seen the land so dry. Whether they can survive a fourth year of drought is a question he can’t answer, and he hopes that Mother Nature will come to the rescue.  It rained a bit this past weekend, but it is only a drop in the needed ocean.

If the harvest fails, the price of the nuts will skyrocket, as demand shows no sign of slacking off. California already provides 2 billion pounds every year of the nut that the world cannot get enough of, and they have doubled production in the last ten years.

Almond trees just do not fare well without water. Irrigation has done an amazing job of turning desert into suitable growing areas, but some now say that almonds should never have been planted there in the first place. Crops like cotton or tomatoes would have used up half the amount of water to grow well. Retired geography professor from Berkeley, Richard Walker, says that the Westlands, in the Central Valley, should never have been turned over to farming.

To cease from irrigation, and stop putting crops where the land can’t support them is one suggestion. With such a cash-rich crop of mature almond trees on their farms, and a global demand for the product, this is understandably unpopular with farmers. Letting fields lie fallow to conserve water will be horribly painful as the lucrative trees will die. At present there is a scheme up for public comment, the Bay Delta Conservation Plan, which would potentially save the Westlands.

Even the Californian snowpack cannot help when it melts as the Department of Water Resources has announced it is holding only 20 percent of its average water content.

Australia is looking to California and seeing their potential loss as their gain. The Murray River Basin, where most of their almond production is based, has good water supply. They have unsuccessfully tried to start almond orchards in other regions, such as West Australia, but it was just too dry there. Nevertheless, they forecast excellent crops from their surviving orchards in 2014 and as yields slump from America, they hope to profit. In anticipation, share prices are shooting up and investors are looking for opportunities to get into the almond industry.

Almonds do still represent a “Gold Rush” chance to make a lot of money, but whether it is all over for California will depend on the current threats being removed.  There is the immediate need to get the nut-nappers locked up, but above all, they need the rain.