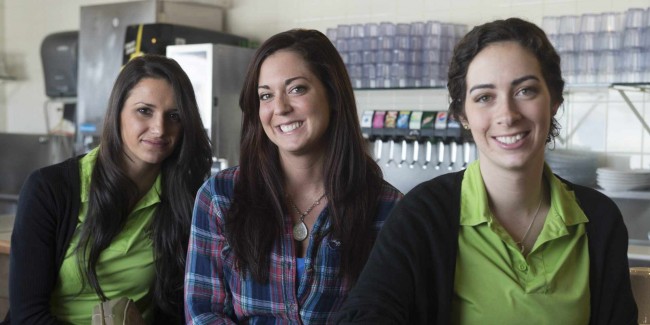 Three waitresses were chatting while folding napkins and cleaning silverware at the Boone County Family Restaurant in Caledonia, Illinois when they were given a $15,000 tip by an anonymous benefactor. The blonde middle-aged woman overheard Amy Sabani, Sarah Seckinger and Amber Kariolich talking about “school, braces, loans and everything we can’t afford” and after asking their names, she offered each a check of $5,000.

Sabani, a 25-year-old waitress, thought that the check said $500, but on closer inspection saw that it was for $5,000. She wanted to decline it but the anonymous benefactor insisted the three waitresses should take the money. For Sabani, this was a chance to quit the second job and spend more time with her little boy.

The young women recall that the lady told them to spend the money on “school and everything else in life” and was certain that God sent her in that family owned restaurant to help those young women who were having financial difficulties.

Seckinger, 23 years old, told the press that she saw the blonde woman looking at them, but she thought that she was simply interested in what they are saying. The youngest waitress has worked at Boone County Family Restaurant for six years but she was dreaming of becoming a police officer. However, she had to postpone the last semester and the chance to obtain her associate degree in criminal justice because the tuition was too high. Thanks to the anonymous benefactor who gave her a tip of $5,000, Seckinger can now go back to school, finish the degree and pursue her dream of becoming a police officer.

Still, leaving her job at the restaurant is not part of Seckinger’s plan, because “it’s like a family here.”

Amber Kariolich, one of the waitresses who received a total of $15,000 from a person who wished to remain anonymous has worked at the family owned restaurant for 10 years. The 28-year-old woman was actually serving the mysterious lady who left immediately after she gave a tip of $15,000, but did not forget to pay for the $9 omelet she ate while listening to the girls.

Who Is the Blonde Angel?

Matt Nebiu, the restaurant’s owner told the Register Star that the woman came to Boone County Family Restaurant before but she was not a regular customer. The anonymous benefactor was enjoying her omelet alone at the counter when she interrupted the waitresses’ discussion and gave them a tip of $15,000.

The middle-aged woman asked the waitresses not to disclose her identity and strongly believed that God sent her there to help them. “You put that in your pocket,” she told the waitress who served her, Amber Kariolich.

The restaurant owner called the bank after the blonde angel left to verify the validity of the checks. After the bank confirmed that the money was authentic, Nebiu could not believe his eyes. He told the press that he knew there are “nice people out there,” but in the small town of Caledonia nobody did such a nice gesture in more than 30 years.

“It was very generous,” Nebiu said.

Although the anonymous benefactor who gave the three waitresses a $15,000 tip left immediately after offering the three checks, her gesture instilled hope into the young women’s hearts, allowing them to dream that one day they will have “the amount to do the same thing to somebody else.”