Argentina, Kirchner and the Winter of Discontent 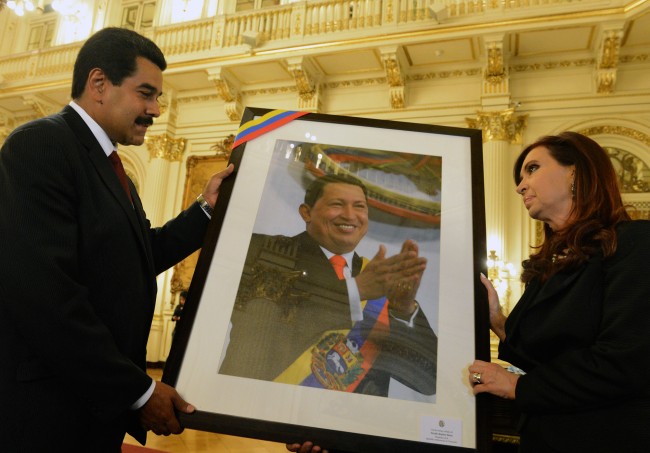 As winter approaches in Argentina, many political observers in the Western Hemisphere believe that the country is heading down the same rocky road on which Venezuela finds itself. They have good reason. The two countries have much in common between their leaders.

Both the Argentine president, Cristina Fernandez de Kirchner, and the Venezuelan president, Nicolas Maduro, are populists who came to power through no skill, ability or intellect of their own. Kirchner inherited the mantle when her husband, and predecessor, died. Maduro was hand chosen by Hugo Chavez while Chavez was dying with cancer. Both firmly believe, and espouse, the theory that any doubt of their skills is unpatriotic and a threat to national security. Unable to make their respective countries better, each chooses to ignore the realities of their failures and continue to speak to the shrinking numbers of supporters of how good they have it.

Argentines, like Venezuelans, have become more sophisticated about their leadership. In the past, both populations have chosen to keep quiet, speaking mainly in hushed tones about their leader’s shortcomings. Realizing that silence is consent, people in both South American countries are turning up the volume of discontent.

Kirchner and Maduro are finding this out the hard way.

In his book, Mein Kampf, Adolf Hitler shared some of his beliefs about leadership. A quote from the book reads,

“If you tell a lie big enough and keep repeating it, people will eventually come to believe it. The lie can be maintained only for such time as the State can shield the people from the political, economic and/or military consequences of the lie. It thus becomes vitally important for the State to use all of its powers to repress dissent, for the truth is the mortal enemy of the lie, and thus by extension, the truth is the greatest enemy of the State.”

It is as though Kirchner has taken a page from Hitler’s playbook.

Another Crisis for Argentina

Argentina is staring another crisis in the face. This crisis comes with strong implications for the globe. Recently, Argentines have suffered through another bout of hyper-inflation. At the same time, international lenders are being doubtful about the nation’s ability to may its debts. Kirchner has failed to talk about the issues. She’s devalued the currency, put in a couple of austerity measures and started talking to the debt holders. But she would rather not talk about the crisis. Like an ostrich with its head in the sand, she doesn’t want to acknowledge the critical situation of the country. Many people are asking why.

The answer to that vexing question can be found in populism’s history in Latin America. The answer has less to do with economics than with the philosophy of populism and Kirchner. The filter through which she sees the past, present and future is the same that was worn by previous presidents. It wasn’t good for Argentina then. It’s not good for the land of Tango now.

The current situation in Argentina sheds light on similar public attitudes in Venezuela where the political religion of populism is paramount. In both countries, there is the tendency to confuse the presidential administration with the country in general. Seen as unpatriotic, criticism of the president is not tolerated. It doesn’t matter how inept the leader is. When Kirchner is confronted by critics, she and her dwindling number of supporters, turn up the volume in questioning the critics’ patriotism. Neither she, nor her admirers, can understand how patriotic dissent can actually be.

Argentina in crisis is nothing new. From about the 1930s, the nation has experienced many financial crises. As in the current one, each crisis has had inflation and huge capital expenditures. The thing that makes this crisis different is that it follows many years of high commodity prices. High commodity prices led to a growth of Argentine exports. The current crisis is just the latest in a long tradition of governmental economic mismanagement.

The Fatherland is in Danger

Open Letter, a collective of Argentine pro-government egg heads, announced a few weeks ago that the “…fatherland is in danger.” The populist intellectuals weren’t talking about the crisis though. They were criticizing people who talk about the crisis. Any reference to the present situation of the country is “anti-patriotic.” Last week, Kirchner denounced what she called a “…chain of bad vibes” about complaints of her handling of the economy. Kirchner implied that any criticism of her handling the nation’s finances are also a move against democratic governance.

Kirchner’s diatribe about “unpatriotic” people who complain about the economy came within weeks after her month-long absence from public life. Most Argentines believe that Kirchner wasn’t really working during her retreat in Patagonia. When Kirchner finally ended her silence, she made a jovial speech which did not talk about the reasons for her prolonged and very strange absence. Neither did she talk about the dire economic situation. She instead spoke to her few supporters, who have a tendency to believe that Kirchner is always right. Kirchner believes that she has no need to explain herself. She expects her followers to accept her leadership only on faith.

Kirchner shares a governmental style with General Juan Peron, Carlos Menem and other Peronist leaders. Based on an authoritarian form of democracy, Kirchner, as did Peron and Menem before her, turns her nose up at checks and balances. She has shown a tendency to believe that her administration is above question and any discussion is seen as a national betrayal. As any leader with a populist leadership style, such as Kirchner’s in Argentina and Maduro’s in Venezuela, the leader believes that she or he must think and act for the majority of the citizens while completely disregarding the minority groups. Voters from the minority groups are expected to keep quiet, toe the line and do what the president wants without any meaningful or detailed explanation from the leader.

Kirchner’s administration has twisted and warped economic indexes and social statistics while attempting to control the price of consumer goods. She has been a complete failure at managing inflation and currency exchange. Kirchner’s actions have only been an attempt to make the reality around her fit into the story she wants told — and believed. These aren’t the only bits of presidential misdirection and camouflage at work.

If someone is critical of Kirchner, she characteristically ignores them. If the critic persists, Kirchner makes another long-winded speech and wonders who do people think they are that they can criticize her. Something Kirchner cannot address though, is the question that, if her administration and the country are doing so well, why does Kirchner continually refuse to address the concerns of many Argentines who believe the economic crisis is staring them in the face.

Winter in South America arrives soon. Maybe the spark of protest seen now in Caracas will ignite the fuel of discontent simmering in Buenos Aires.

One hundred years ago Argentina was a strong country. It can be again one day. It could be soon.

2 Responses to "Argentina, Kirchner and the Winter of Discontent"