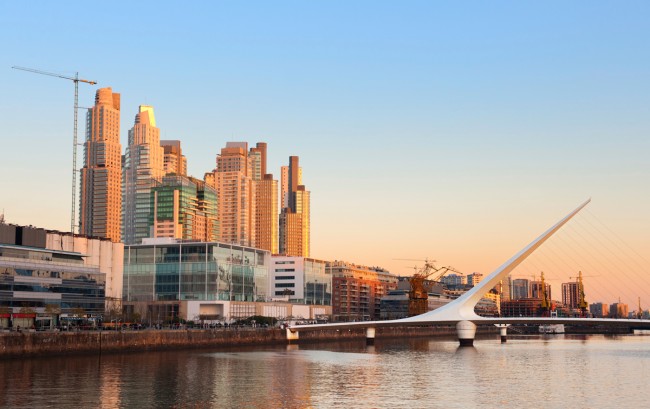 Argentina is slip-slidin’ away — again.  In the 198 years since the founders first signed the Argentine version of a Declaration of Independence, the country has slipped and slid, on average, every ten years.

Built on the system of corruption and nepotism that was the order of the day in 19th century Spain, Argentina has continually been like a car driving up an icy hill.  It seems to get traction and make some progress only to lose out to business-as-usual and slide back down the hill again.

The last time Argentina was in this predicament was in 2001.  President Nestor Kirchner tried to put the brakes on runaway inflation and confiscated people’s bank accounts, nationalized oil companies and, well, generally made a mess of things.  Argentines took to the street in numbers not seen since before the Dirty War.  With rioting happening all over Buenos Aires and blood being spilled in the streets, the government couldn’t do anything but sit back and watch the country implode.

The same ingredients are in the lethal mix again.  The inflation is running at record highs, crime in the streets is accepted as normal and people are literally putting their money under the mattress instead of trusting it to banks.  The only difference is that Christina Kirchner, Argentina’s current president and Nestor’s widow, is nowhere to be found.

President Cristina Fernandez de Kirchner, 60, has been president since October 2007 when she won the office with 45 percent of the vote.  She won again in October 2011 and this time garnered 54 percent of the popular vote.  She seemed to be trending upwards and the country was hers.  Or so she thought.

During Nestor’s time in Casa Rosada, Cristina worked hard as First Lady.  Recalling the style of her heroine, Eva Peron, Cristina traveled the country giving her speeches in a highly combative style which polarized Argentine politics.  While constantly rejecting the comparisons between herself and Eva, she did say in an interview once that she identified herself with the Evita with the hair in a bun and the clenched fist in front of a microphone.

In the fall of 2013, as her approval rating was settling in at the low 20s, Kirchner had surgery for what allegedly was a brain aneurysm.  However, her office nor the doctors have cleared up much of the fogginess around the surgery and her resulting absence from the public’s eye following it.  When she was seen emerging from the hospital a week after the surgery, she looked more like she had undergone a facelift than brain surgery.

Before the operation, she had the habit of speaking daily to her subjects.  Often speaking for as long as two hours at a time, Kirchner would harangue the opposition, blaming mysterious, yet never identified, “outside” sources for the problems in Argentina and pointing to one day in the future when Argentina would reclaim its place on the world stage.  Since the operations, Kirchner has only addressed the country one time.

In January 2014, during a record-setting fall of the peso, Kirchner packed up and headed to Cuba.  Unable to stick around and work to address the problem, she handed the country off like a baton in a relay race to her second-in-command and disappeared.  With a power vacuum in place, Argentines are left wondering who is running the store.

From 1976 to 1983, Argentina was under a military dictatorship.  Opposition rose up and was quickly squelched as 30,000 people were taken from the streets and sidewalks and many snatched from their homes late at night.

The wholesale brutality in South America’s second largest country was done in coordination with Chile — remember Pinochet — Bolivia, Nicaragua and others.  The American government was involved in the murderous regime also.  Documents declassified during Bill Clinton’s presidency show that the crimes in Argentina were committed with the assistance and guidance of the Central Intelligence Agency, the CIA.  The same documents show that Henry Kissinger, former Secretary of State, was instrumental in as a conduit between the US government and Argentina during the time of Jimmy Carter’s presidency.

In 1983, tired of sagging public morale — go figure — the military junta in Buenos Aires decided something needed to be done.  A plan was made to misdirect the public’s attention from the inflation and crime at home and pick a fight with the British on some wind and sea swept islands known to the world as the Falklands.  The humiliating defeat led to the military practically being dismantled, and today Argentina doesn’t have enough parts to build one tank.

With a combination of inability and unwillingness to send military personnel into the streets to kidnap members of the dictatorship’s opposition, the government relied on the police to do their dirty work.  Never fully trusted by Argentines, the police credibility crashed into an all-time low, a spot from which it has never recovered.

Following the end of the military-induced holocaust, the civilian government tried to reign in the police.  National legislation was passed that limited taxpayer funding of law enforcement to 25 percent of their operating budget.  The rest would have to be self-funded.  Making the police responsible for 75 percent of their own funding opened doors to new levels of corruption.  Today in Argentina, it is an open secret that the “policia” are complicit with drug smugglers, cartels, human trafficking and the rampant crime which occurs almost everywhere.  Many see the police as a tool which will be used again by the government when it comes time to brutally beat down revolution.

An American in Buenos Aires

The US Embassy has been closely monitoring the downward spiral as the country shakes itself apart.  In November 2013, the embassy quietly started advising Americans to be prepared to move at a moment’s notice should the advisory to leave the country be given.  As the New Year came and went, those quiet postings on expat Internet forums started to take on a drum beat which is slowly growing louder.

Americans, fearful of what is probably on the horizon, are quietly booking tickets and double checking their passports as they prepare to leave.  While the numbers of US citizens so far have been low, they may increase as the crisis deepens.  Rumors in online forums recently said that airlines are reserving seats for Americans wishing to leave the country.  One source, within the airline industry, confirmed the seat buyout.

3 Responses to "Argentina: Slip Slidin’ Away"