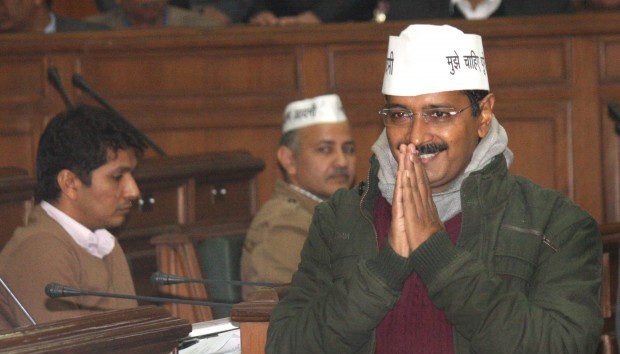 Forty eight days after he took over as the Chief Minister of Delhi, activist-turned-politician Arvind Kejriwal put in his resignation to thunderous applause from his party supporters.He had come good on his threat to resign if he was thwarted from passing the Delhi Jan Lokpal Bill, which aims to create an ombudsman body that inquired into charges of corruption against government officials and politicians. Arvind Kejriwal has once again shaken up the political system in India by quitting over delays in passing the Jan Lokpal Bill.

By cannily positioning the AAP as the only clean alternative to a corruption-wearied electorate, Kejriwal had ushered in seismic shifts in Indian politics.The anti-corruption bill, is the key plank in the manifesto of his fledgling party, the Aam Aadmi Party (AAP) during the state elections in December 2013. Though short-lived, his tenure was styled with his anarchist method of governance that evoked criticism that he hadn’t made the transition from an agitator to an administrator. Kejriwal dismissed his critics saying that going after the corrupt was governance.

Kejriwal quit hours after his party was blocked from passing the Lokpal bill in the Delhi Assembly by 42 Members of Legislative Assembly (MLAs) in the 70-member strong assembly. The main opposition came from the Bharatiya Janata Party (BJP) and the Indian National Congress (INC) with their MLAs calling the bill “unconstitutional”. They argued that bills without federal sanction could not be introduced in the Delhi Assembly.

The introduction of the tough anti-graft bill provoked chaos in the assembly leading to its adjournment in the afternoon. Earlier that morning, the assembly was disrupted several times with members demanding that the Speaker, M.S. Dhir, read out a written message from Delhi’s Lieutenant Governor Najeeb Jung. Though the bill had been vetoed by Jung, Kejriwal refused to back down. Saying he too has read the Indian Constitution, the Delhi Chief Minister said the Constitution did not specify anywhere that the Delhi Assembly needed the Centre’s permission to table bills. In the recent past, Kejriwal had written a letter to Home Minister Sushilkumar Shinde asking him to revoke a 2002 order that made federal consent mandatory for all bills tabled in the Delhi Assembly.

After the Speaker had read out the message and Kejriwal had introduced the bill, the discussion session turned chaotic and the assembly had to be adjourned once again. Only AAP’s 27 members and its rebel MLA, Vinod Kumar Binny voted for the bill, when the Speaker sought to find out from the reconvened assembly if the bill could be introduced. Hours later at his party office, Kejriwal had announced his decision to quit over the opposition to the Jan Lokpal Bill  and recommended to President Pranab Mukherjee (through the Lt. Governor) that fresh elections be immediately held in Delhi.

With his trademark muffler draped around his head, Kejriwal told the cheering group of supporters that the Congress and the BJP were blocking the bill because they knew many of their leaders would be behind bars if it was passed.The cheering crowd of supporters, had flocked to the party office after being tipped off by mass SMSes about the imminent resignation. He also hinted that the recent First Information Reports (FIRs) filed against Reliance Industries chief Mukesh Ambani and Union Minister Veerappa Moily had probably confirmed the opposition’s fears.

Addressing the crowd, Kejriwal alleged that for 10 years Mukesh Ambani had backed the ruling United Progressive Alliance (lead by the Congress) and that for the past one year he had begun backing Narendra Modi, the BJP’s prime ministerial candidate. Kejriwal wanted to know where Modi was getting his vast funds from and suggested the existence of a political nexus between the Congress, the BJP and Ambani. The mainstream parties were, according to him, worried that the Jan Lokpal Bill would spell doom for other senior leaders like Kamal Nath and Sharad Pawar. Incidentally, in a press conference held a few weeks back Kejriwal had read out a list of India’s most corrupt politicians.

While his supporters may have placed him on the pedestal and celebrate him as a fearless champion, Kejriwal has no dearth of opposition and criticism. Reactions to his resignation circle around a theory that he has been wanting to quit for a while now. They feel the resignation would help Kejriwal project himself as a martyr, who is now incidentally free to step up his campaigning for the upcoming general elections.

In fact, the Times of India and Ipsos, a research agency, recently revealed the results of an opinion poll they conducted across eight of India’s major cities and the results were very favorable for Arvind Kejriwal. While Narendra Modi continues to top polls with a whopping 58 percentage of the votes, Kejriwal has moved up the scale at a surprising rate to second place with 25 percentage of votes. Forty four percent of the respondents have pledged their support to the AAP.

The Delhi Assembly’s lack of enthusiasm for passing the Jan Lokpal Bill may have forced Arvind Kejriwal to quit office, but this may only fracture the votes for the BJP in the Lok Sabha elections. Especially since the Congress is facing an almost insurmountable wave of anti-incumbency.