By Jonathan Holowka on February 5, 201412 Comments 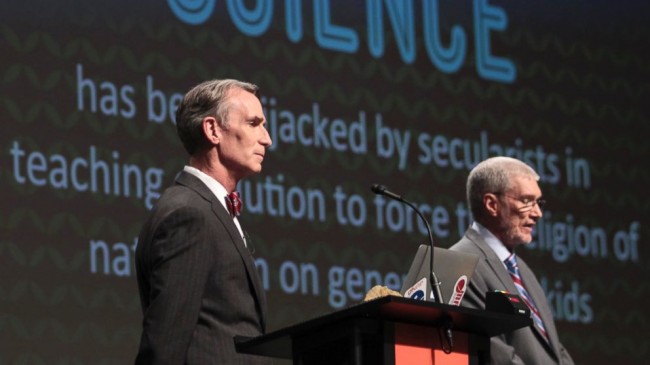 It was back in January when the Richard Dawkins Foundation website published an article, which provided proof on why Bill Nye debating the creationist Ken Ham was the wrong way to go about defending evolution. They made some very powerful and compelling arguments, such as that debating a creationist deems them actually having some credibility in their arguments, ammunition that most scientists know to avoid providing. They explain that evolution is a fact backed by countless amounts of research and creationism is a debunked myth, plain and simple.

The Richard Dawkins Foundation also argued that Nye is not a biologist, does not practice research science and should stick to talking about what he knows best. He is not qualified to defend evolution against common men such as Ken Ham, someone who actually holds a degree in environmental biology.

Lastly, the Richard Dawkins Foundation argued that in a debate, it is absolutely imperative for one candidate to fully understand their opponent. They argued that Nye would attempt to use science, reason and evidence to counter Hams creationist theories and arguments. However, Ham who carries the creationist mindset would not play by the rules and would disregard any facts or evidence and instead, replace logic with nonsense, confusion and essentially what comes down to stubbornness. A reformed creationist, David MacMillian published an article on The Huffington Post backing some of these claims up and explained why Nye should not underestimate Ham. Overall, as the Richard Dawkins Foundation explained, the risk versus reward makes doing the debate not worth the effort.

Did Bill Nye prove the Richard Dawkins Foundation wrong with yesterday’s debate? Not only did Nye annihilate Ham in the debate as many expected him to do, but he helped expose Ham, and in turn, his creationist model as being completely fraudulent. He did this by simply employing an unlimited supply of logic and reason in his arguments. It is natural that the atheist and secular communities would be on Nye’s side of the debate but what is more interesting is the number of Christians who are shaking their heads in Ham’s direction. After taking a look at the top comments on Reddit’s /r/Christianity subreddit’s official debate discussion thread, that much is clear. One user, theGolgiApparatus writes:

the fish in the cave story proves Ham doesnt fundamentally understand what the theory of evolution actually is.

Another user, trueBlonde made a great observation about one of Ham’s primary arguments:

Finally, a Redditor called BrownNote was remarkably impressed by one of Nye’s questions:

BILL JUST TURNED IT UP TO 11. “I have a question for you, Mr. Ham. What can you prove? All you’ve done tonight is come up with explanations, this is very troubling to me.” No more Mr. Nice Nye.

Back to the Richard Dawkins Foundation, here are some alternative counter-arguments as to why the debate was a good idea after all.

The debate did nothing to add any credibility to the creationist’s case and in fact, offered plenty of arguments and evidence to support the claims of evolution and the scientific method and show why creationism is just not viable. Even if people were not debating creationists on the big stage, it has nevertheless been a hot topic of discussion all over the internet for years. Bringing the issue in front of a worldwide audience blew any notion of credibility that creationists had to offer completely out of the water. Ham’s arguments essentially boiled down to, “The Bible said it. I believe it. That settles it.”

Despite a plethora of evidence that was continuously stacked against Ham, this was his repetitive argument and it made him appear as un-credible as someone can possibly be.

The Nye is not a biologist issue

It is a fact and not one that can be debated but that does not mean that Nye was unprepared in any manner of speaking. While he may not have anything more than a degree in engineering and three honorary doctorate degrees, this did not restrain him from presenting an insurmountable amount of evidence and preparing highly well-formed counter-arguments to debate Ham’s creationism model.

It sometimes takes more than simply having a slip of paper to indicate one’s intelligence as Nye no doubt proved during yesterday’s debate. After all, Bill Gates, one of the richest men in the world did not receive an honorary degree until 2007. While Nye may not have a Ph.D in biology or any other type of science, he did study under Carl Sagan, is the CEO of The Planetary Society and did manage to take Ham to school.

The not understanding your opponent issue

Did Nye understand Ham’s viewpoints? From the moment he took the stage (and after telling a brief story about bow-ties because why not), Nye began to rip into Ham’s theory about historical science and ham’s flood.

He used fossil evidence to explain how Ham’s method is not viable. He explained how there would need to be fossil evidence of kangaroos travelling between the Middle East and Australia within the last 4,000 years. He explained how humanity would need to have discovered 11 new species every day if life really did start from just 7,000 as Ham claimed.

He explained how Noah’s family who had no experience in ship building would have had to build gigantic ship that could house 7,000 types of animals and the best ship builders in the world could not build a ship like that many years ago.

He explained that science needs to have the ability to predict and Ham’s version of science cannot do this. In fact, he challenged Ham multiple times throughout the presentation as well as during the question and answer session to predict just one thing with his creationist “science.” Nye knew his opponent so well it was as if he had lived a lifetime in his shoes.

Did Bill Nye win the debate? He absolutely did. And did Bill Nye further prove the Richard Dawkins Foundations wrong in their assertion that he should not debate a creationist? It would certainly seem that way.