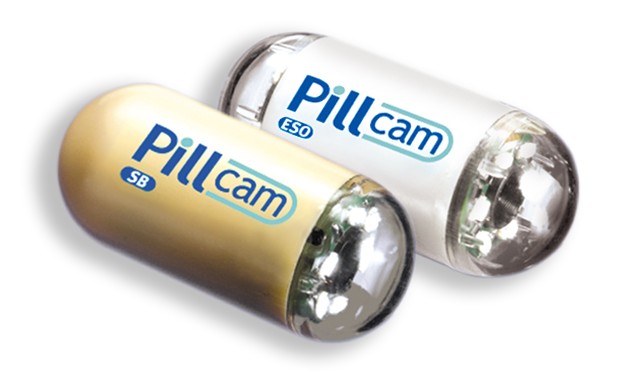 Options are soon going to be available to patients that are not able to complete, or have a regular colonoscopy procedure thanks to a new small camera pill. The FDA has approved this new device that will be able to travel through the gut snapping pictures with no pain or discomfort that is normally associated with a regular exam. This new alternative will be able to offer patients a choice where there were none before.

Simply swallow the camera pill and wait. For one type of camera people will have to wear a special vest, that will keep the camera powered and be able to receive the wireless pictures that doctors will then be able to review on their computers after it has completed its travel through the intestine in roughly eight hours. Other varieties of the camera pill have batteries instead that allow patients to simply wear a device around the waist. The camera can take up to 870,000 pictures in its travels, giving doctors a vast amount of data in order to be able to see any possible polyps or other signs of colon cancer without having to solely rely on invasive procedures that leave many people not getting the exams that are needed for early detection.  This nice alternative will be a welcome relief to people that have a fear of regular colonoscopy exams.

According to the CDC, if you are aged 50-75 people should be having regular endoscopies. With many not following these guidelines due to a variety of factors, such as cost, discomfort, and embarrassment, and or physical issues, this could be the answer that not only doctors, but a large amount of patients have been waiting for.

The cost for this little camera is relatively inexpensive and has actually been around for some time. This technology was developed originally from military defence systems from a company from Israel, Given Imaging that had also developed a device that was similar to the pill camera to view the small intestine back in 2001. While this technology has vast potential, the images are not always as clear as the traditional procedure performed in doctors’ offices. It is interesting to note that Covidien, an Irish medical device firm had stated they would buy the company for $860 million dollars. The pill camera has been approved in 80 other countries besides the United States. There has been no other speculation of a pending sale of the Given Imaging company thus far.

There are other options becoming available with this new technology, The Sayaka Endoscope Capsule from the Japanese RF System Lab. the Sayaka endoscope capsule enters clinical trials this month in the United States. This camera differs slightly from Given Imagining in that the patient wears a special vest instead of a recording device around the patients waist. This pill camera has the ability to spin 360 degrees every 12 seconds. This allows the camera to get a much better picture of the tissue walls, as some other devices have the camera facing forward instead of mounted on the side. This change to the camera pill provides hope that these new alternatives for colonoscopy exams will provide even better, clearer results for doctors.

When it comes to colon cancer, it is the third most common type of cancer that affects both men and women alike. It has been found to be the second leading cause of cancer related deaths in the US. However, with the new alternative for colonoscopy exams becoming available with the camera pill, this could be the extra nudge some people need to have regular tests. This type of cancer has a high rate of being treated successfully if caught early.

3 Responses to "Camera Pill a New Alternative to Colonoscopy Exams"