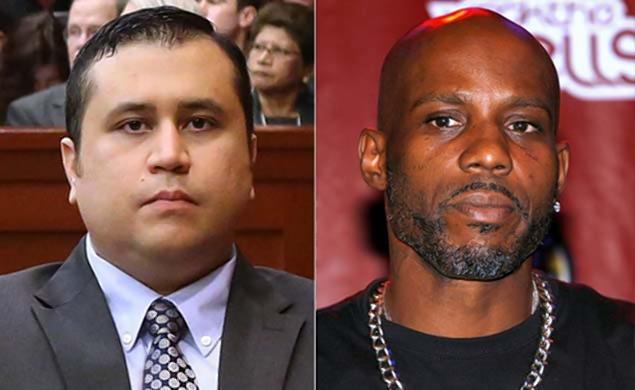 DMX took to Twitter to announce the “celebrity” boxing match not agreed upon with George Zimmerman has been canceled. The rapper also stated Zimmerman is the “wrong person” to put in a boxing ring to define “celebrity.” DMX shrugs off the aspect of the million dollar match, stating he would rather be “happy” than perform something he feels is not right.

It seems many others agreed with DMX. The reports of the cancellation seem conflicting. The promoter of the match, Damon Feldman stated the match was called off after a public outcry was heard and shared. The rumored match developed into a Facebook page called “Cancel George Zimmerman ‘Celebrity’ Boxing Match.” The page earned over 315,000 likes in no time from individuals who were not happy with Zimmerman being glorified as a celebrity. Further yet, Feldman made the boxing match announcement on Trayvon Martin’s birthday – enraging much of the public.

Although Zimmerman was acquitted of the shooting that left 17-year-old Martin dead, society has become split on the decision. Many called Zimmerman a “wanna-be cop” who trolled the neighborhood for trouble. In 2012 Martin had left a store and headed home, with a bag of skittles and a can of tea. Within the gated community of homes, Zimmerman spotted the teen. The events leading up to the scuffle and shooting death of the teen remain a series of debates among viewers of the case. With bitterness entrenched, individuals around the nation were unhappy to hear of Zimmerman being cast into a “celebrity” boxing match.  It seems DMX agreed and canceled the promotion, advising he could care less of the pay day.

Feldman started feeling the heat shortly after announcing the potential match. The promoter states his life had been threatened, and he hired a bodyguard for his protection. Reports allege Feldman canceled the event, as he was in fear of his life.  Feldman’s assistant, Sherry Schaefer reports billionaire Alki David was going to fund the boxing match and even offer it on a television service. The match scheduled to March 15 was never agreed upon, states a spokesperson for DMX.

Reports are varied as it appeared thousands of applications were submitted and it was the application of DMX that caught the promoter’s eyes. Reportedly, DMX felt it was something he had to do for all black people who had been “done wrong in the system.” It seems the statement is being retracted and DMX’s spokeperson advised DMX has no plans to pursue the match and instead is focusing on his upcoming concert events.

Zimmerman should potentially focus on fixing himself. The former neighborhood watchman has not been clean since his 2013 acquittal. He has experienced several instances with law enforcement, including speeding. Additionally, this past September,  Zimmerman’s estranged wife called the police stating her husband was threatening her with a gun. Zimmerman was not charged and his exact employment or future plans remain unknown.

Thousands may had been anticipating the fight, but it appears that will not be happening now or anytime in the near future. Feldman stated he withdrew due to death threats, DMX stated he never agreed to a boxing match with Zimmerman and stepped outside of the spotlight. The rapper advised he did not feel it was Zimmerman’s place to be labeled as a “celebrity.” What are the thoughts surrounding this canceled event? Glad it is canceled or should Feldman seek another opponent?