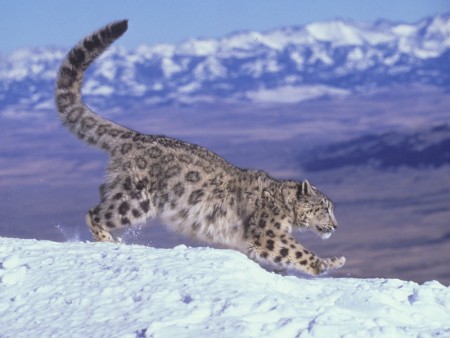 Classified as an endangered species, the snow leopard (Panthera uncia) has suffered from a steady reduction in numbers within its natural habitat in the mountains of Central Asia. Snow leopards are sometimes referred to as “mountain ghosts” and are extremely difficult to study because of their stealthy and elusive nature. In an effort to shed more light on how best to preserve this endangered species, scientists discovered that conservation of a specialized dietary niche might be a key contributing factor.

The snow leopard is most closely related to the tigers (Panthera tigris), but is comparatively one of the smaller big cats. This smaller size may be an adaptation to the cold weather of its native habitat in the mountains ranges of Central Asia. The snow leopard is a top-order predator that requires a sizable territory with many grazers. As such, the snow leopard has been categorized as an indicator of an intact eco-region. An absence of snow leopards from its native region may be a sign of particularly adverse or unusual weather conditions, disruptive human development, or a scarcity or overabundance of other species from lower trophic levels.

Over the past sixteen years (two generations) snow leopards are estimated to have decreased in population by 20 percent. This reduction is due to a combination of poaching and habitat loss. Despite efforts to protect this species, the body of a snow leopard sells for thousands of dollars and the bones of are a coveted part of traditional Asian medicine. Experts estimate there may be as few as 4,080 snow leopards left living.

This month an international team of scientists released a meta-analysis of previously published and unpublished literature that was analyzed to identify and quantify the preferred diet of the snow leopard.  The study identified the Siberian ibex and blue sheep as the snow leopard’s preferred prey. Other food sources include the argali, Himalayan tahr, and marmots.

The researchers also identified the size of the prey as an important part of the snow leopard’s diet. Snow leopards require 1.5 lbs of fresh meat per day. Hunting prey takes time and energy, and therefore it would seem advantageous for a snow leopard to show preference for larger prey. As hypothesized, the snow leopard prefers to kill prey that weighs between 36 and 76 kg (79-168 lbs).

The results of this study emphasize that conservation efforts for this endangered species must include measures to conserve the species upon which the snow leopard preys. In particular having well-established and healthy herds of wild sheep and ibex are important, as snow leopards prefer to hunt game that is larger.

Snow leopard’s preferences for larger game also help rationalize why they will periodically attack cattle.   Increasingly the snow leopard’s natural range is being encroached upon by cattle farmers who dislike the threat that snow leopards pose to their grazing herds. As a result, the big cats now face considerable persecution in regions that are being developed as pasture lands. However if conservation efforts can focus on maintaining populations of wild prey, it is hoped that perhaps the snow leopards will adhere more to their natural diet.

This is yet another case in which preserving an endangered species turns out to be much more complicated than it may appear at face value. In order to preserve the snow leopard it is important to consider the entirety of their inhabited ecosystem.