Firearms Allowed on Campus in Idaho so Students Can Protect Themselves? 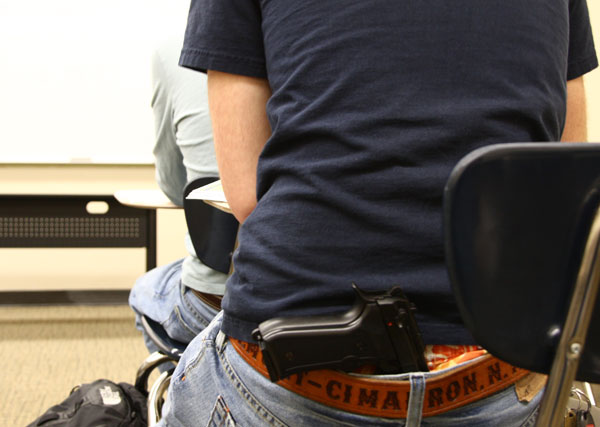 In Idaho, a bill is being considered which would allow students, teachers and administrators to carry firearms on university and college campuses. The bill is an attempt to make the environment safer and to give students and teachers the opportunity to protect themselves from any outside threats.

This will be the second attempt in Idaho at passing a bill that allows concealed weapons on campus. The bill was previously rejected in 2011 as it did not include the enhanced concealed weapons permit, which was later created last year in Idaho. The permit requires an individual to be 21 years of age or older to qualify for a firearm, and they must also complete a training class with an instructor who is NRA-certified.

The current bill was passed on Feb. 18 by the Idaho Senate. According to the new bill, firearms would be prohibited from resident halls or dormitories, along with stadiums and any facility that houses more than 1,000 people. However, it is uncertain how sorority and fraternity houses will be affected by the bill as they are not owned by universities, despite being on campus.

Idaho joins Oregon, Kansas, Colorado, Wisconsin, Utah, and Mississippi, among other states, which have allowed concealed guns on campuses. On the flip side, there are only 21 states which has a ban on firearms on campus.

If passed there will likely be additional costs to ensure safety measures, such as security officers who are armed, ballistic vests, annual training, and metal detectors in areas that are gun free. Basically, in Idaho if the bill is passed students can legally carry a firearm on campus so as to “protect themselves.” Yet simultaneously, security will be required to protect the community from any potential threats within the campus – protection to protect from protection.

The costs of such security are considered a headache, estimated to be $2 million annually in extra costs for Boise State University. Furthermore, Idaho State University calculates $1 million in costs, while North Idaho College puts the expenses at $250,000 annually.

Next week on March 6, Jeff Gunter, a police chief in central Idaho city, Hailey, will testify against the bill before a legislative committee. Gunter seems to be fine with the part of the bill that allows guns on campuses as he supports the second amendment. However, his problems is allowing guns in the College of Southern Idaho in Hailey, which also houses a high school. In addition CSI also has a campus in the city of Goodwin, which is partnered with the Idaho School for the Deaf and Blind. Even more of a concern is the larger campus of Idaho State University, which shares some space with Meridian High School. The bill could still be passed, but changes are being proposed to accommodate those public spaces populated by students under the legal age.

Recently a teacher in Boise State University, Greg Hampikian, made national headlines with a satiric article he wrote called When May I Shoot a Student. He demanded legal instruction in rules of classroom engagement, asking if he is allowed to empty his clip if a student shoots first; or if it is okay to shoot for the legs if he is in a situation where hostility between two students is escalating. With a hint of seriousness the professor notes how Idaho is encouraging firearms among young people “who are away from home for the first time” and are at the age where experimentation with alcohol and drugs begin. Switching back to sarcasm he says, it is okay though because his current students have learned how to be responsible with a weapon through virtual training on their Xbox and PlayStation. Hampikian makes note how at BSU there is a zero percent murder rate, and how it is not guns that kill people, but people with guns that kill. In essence, he says, encouraging students to carry firearms so they can protect themselves make perfect sense as “bad guys” will now be too scared to go to Idaho.