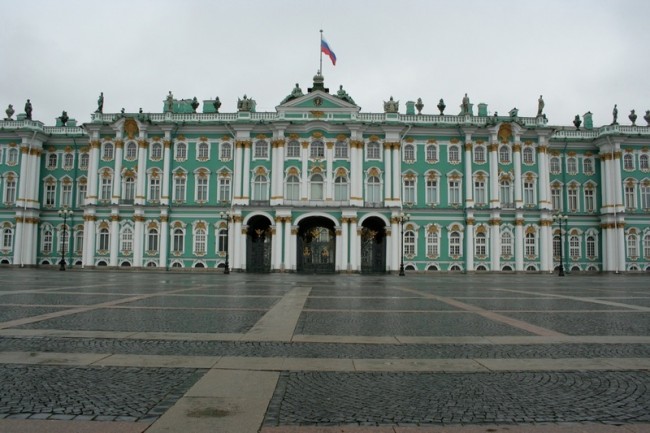 The State Hermitage Museum stands as one of the oldest, largest and most respected art galleries in the world. It was commissioned by Empress Catherine II in 1764 for her newly acquired art collection. She had it built in Saint Petersburg on the grounds of the Winter Palace — the Russian monarchy’s official residence. The Hermitage Museum was part of the imperial “Golden Age” and Catherine the Great’s legacy to Russia.

Expansion of arts and culture flourished under Catherine’s reign. Her art collection began when she purchased 225 paintings in 1764 from Johann Ernst Gotzkowsky, a Berlin merchant. These paintings were originally intended for King Frederick II of Prussia at his own request but he decided not to purchase them afterall. Most of the paintings were by Dutch and Flemish painters as well as some works by Italian artists.

The empress had architect Yuri Velten construct a two-story extension next to the Winter Palace. It combined the Baroque style of the palace with the newly popular Neoclassical style. She then had a French architect, Vallin de la Mothe, build an additional pavilion which she and her close friends used as a place where they could relax. These two pavilions, one on the southern end and one on the northern, were joined by a hanging garden (one that is above ground) with galleries on both sides. This entire structure became known as the Small Hermitage. This is where her first art collection was displayed.

The next major group of paintings, the Bruhl collection, was purchased by Catherine in 1769. She acquired it from the heirs of Count von Bruhl of Saxony. The collection contained over 600 works of art plus prints and drawings from Italian, French, German, Dutch and Flemish artists including Rembrandt and Rubens. 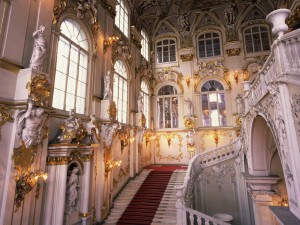 She called upon architect Yuri Velten once again to construct a building that would be large enough to house an expanding library with room for more works of art. This would be a three-story building which became known as the Great or Large Hermitage. It took 16 years to complete from 1771 to 1787. An extension was added in 1792 and the building was connected to the Hermitage Theatre with a bridge. Catherine reigned until her death in 1796. By then, she had a collection of thousands of items that included paintings, books, drawings, jewelry, coins, medals, sculpture and copies of original frescoes that were in the Vatican.

After her death, the monarchy continued pursuing art collections. Emperor Alexander I purchased a group of paintings in 1815 that had belonged to Napoleon’s wife, Josephine. Nicholas I ascended the throne in 1825 following the death of Alexander I and not only added other works of art but created additional galleries. However, the interior of the Winter Palace was destroyed by fire in 1837.

Nicholas I had been attending the theater on the evening of December 17, 1837 when he got word that the Winter Palace was on fire. Smoke from the ventilation system was filling the restored Field Marshals’ Hall which had full-length portraits of various Russian generals who had achieved the rank of field marshal. The architect, Auguste Montferrand, had been commissioned in 1833 for this restoration project and had instructions from Nicholas I to get it done as quickly as possible. In order to comply, Montferrand had used a lot of wood for construction.

It only took minutes for the wooden hall to collapse and the fire to quickly spread throughout the Winter Palace. Nicholas saw it as a rescue operation, saving whatever was possible, instead of leaving items in the path of the fire. In order to protect the art in the Small Hermitage, the passageways leading to it were taken apart. The collections remained safe but the fire had destroyed the entire interior of the residential palace. The fire was traced to Montferrand’s design of narrow ventilation canals partially filled with leftover building materials between the wooden partitions. 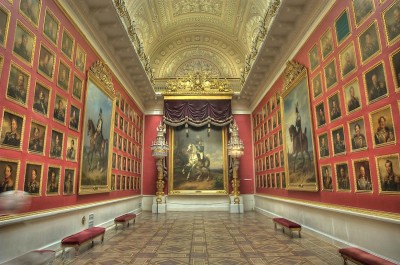 Nicholas did not waste any time having the palace restored. Fifteen months following the fire, the royal family moved back to the residential portion. The state rooms, state staircase, the Throne Room, the Field Marshals’ Hall and others were restored by architect Vasily Stasov under Nicholas’ instruction that the restoration resemble the original Baroque style as closely as possible.

Architects from Berlin and Russia worked to design and build a new public entrance to the Hermitage. The museum opened to the public — those who were wealthy, educated and refined, for the first time February 5, 1852 with a special performance in the Hermitage Theatre and a dinner for 600 people.

The last emperor to live at the Winter Palace was Nicholas II who ascended the throne in 1895. During World War I, the palace was used as a hospital for wounded soldiers. After the Bolshevik Revolution in October 1917, the palace and museum were declared state museums. Acquisitions of private art collections continued while, at the same time, hundreds of works were transferred to the Pushkin Museum of Fine Art in Moscow. This was part of the new Soviet policy to have Moscow be the focus of government and the arts. Saint Petersburg represented the monarchy. An agreement was reached and signed in 1927 stipulating over 500 works that were transferred.

More of the Hermitage Museum collection was sold to other museums that were part of the Soviet Union. The government also ordered that art work should be sold outside of the USSR. They would offer the art as a gift or for sale at a very low price to foreign officials and businessmen. Many took advantage of the opportunity to own art from the Hermitage. The museum staff downplayed the importance of some of the works and hid others in order to keep them in the collection.

When German troops attacked the Soviet Union in 1941 at the beginning of World War II, museum staff wrapped and packed the collection for shipment to the Urals for safekeeping during the war. Two trains with a combined total of over a million works of art made it out of Leningrad (Saint Petersburg) and arrived safely at Ekaterinburg in the Urals. The third train never made it out of Leningrad though. The city was surrounded and under siege for 900 days. The museum was damaged by repeated bombings but the basement was converted into 12 air raid shelters. For awhile, the shelters had approximately 12,000 people in them including the museum director.

After the war ended, the Soviet Union restored the Hermitage galleries and the pavilions to display the works that had remained in the museum during the siege. The exhibit opened in November 1944 and ran until October 1945. Works that had been shipped to the Urals also were returned in October. Volunteers and staff worked quickly to get rooms ready for the art that was coming home. The museum opened to the public November 8, 1945. Detailed restoration on all the rooms would take years to complete.

Following the dissolution of the Soviet Union in 1991, the Hermitage Museum opened a new display exhibit about the history of the first Winter Palace of Peter the Great, at the same location as the current palace. The research had taken 10 years but the combined restoration, display and reconstruction earned the museum architects the State Prize of the Russian Federation. In November 1996, an international membership arm of the museum was created called the Hermitage Friends Club. There are individual and corporate members; both foreign and Russian. This helps with raising needed funds for educational programs, research, restoration and more acquisitions.

The Hermitage started out as a private museum for a private art collection and remains Catherine the Great’s lasting legacy to Russia. The collection now contains over 2.7 million pieces of art. The acquisition and exchange of works of art continue between the Hermitage and museums throughout the world.

2 Responses to "Hermitage Museum: Catherine the Great’s Legacy to Russia"