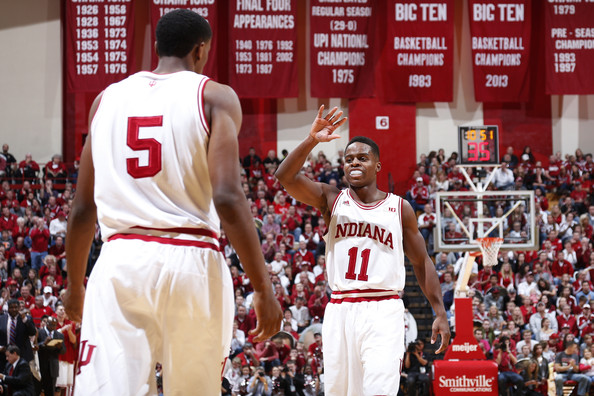 The Indiana Hoosiers were picked in the preseason as one of the Big Ten representatives to make it into the NCAA tournament in March. But as this season rolls onward those hopes are becoming more difficult for this year’s Hoosiers team to achieve.

Indiana currently sits at eighth place in the Big Ten standings with a conference record of 4-5, and an overall record of 14-8. The Big Ten is one of the strongest, and most competitive conferences in the country and standing above the crowd will be a difficult challenge for Indiana this year.

After a crushing defeat to Nebraska last week, Indiana took a gigantic step in the right direction when they faced off against Big Ten rivals, Michigan. Coming into their match up on Sunday afternoon, Michigan was undefeated in the Big Ten conference with a 16-4 record overall. Indiana delivered a statement victory over the Michigan Wolverines and showed why they were projected to make it into this years NCAA tournament.

Much of the uncertainty surrounding this years Indiana team is that they are a young group that lacks true leadership. Well on Sunday at Indiana’s Assembly Hall, the Hoosier’s were led by their youth.

Indiana sophomore guard Yogi Ferrell shot the lights out as he poured in 27 points on 7 of 8 shooting from three-point range. Michigan State as a team only connected on 3 of 13 shots from beyond the arc. Ferrell also contributed on the defensive end as he matched up against Michigan’s leading scoring, Nik Stauskas, for much of the game. Ferrell held Stauskas to six points on 1 of 6 shooting, substantially down from Stauskas’ season average of 18 points per game.

Another Indiana young gun that was a force to be reckoned with against Michigan was Noah Vonleh. The freshman contributed a double-double with 12 rebounds and 10 points on 5 of 9 shooting. The victory by Indiana handed Michigan their first loss in the New Year and their first Big Ten loss on the season. On an afternoon where Larry Bird was in attendance, Indiana improved to 12-2 at home on the season and took a positive step forward on their journey to the NCAA tournament.

While a berth into the March Madness tournament is still a bit of a long stretch for the Indiana Hoosiers, their victory over a high quality  team in Michigan certainly helps their mission. Indiana has six games left within the Big Ten conference this season. If they are able to go above .500 within those conference games it would certainly help their cause and draw some attention from the rest of the country.

Indiana will also need to win outside of the Big Ten as well to keep pace with the rest of the country. It is projected that if the Hoosiers go 8-2 in their final games of the season they will have a good chance at entering the NCAA tournament. The main problem with this goal is that Indiana hasn’t been able to win more than 2 games in a row in the New Year. Indiana will see if they can carry their momentum into Minnesota where the Hoosier’s journey to the NCAA tournament continues on Saturday.