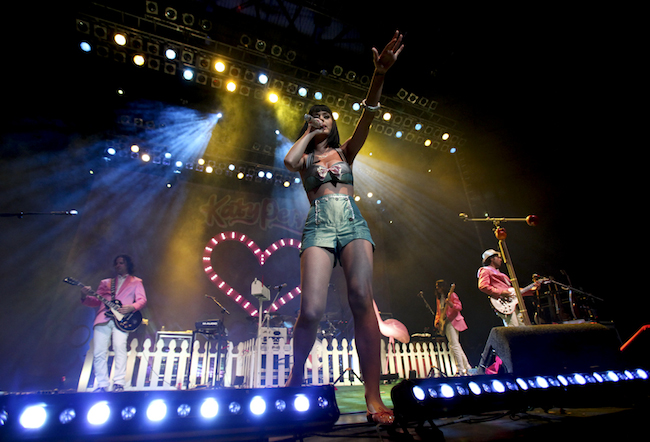 Katy Perry roared into service to help deliver a baby delivery this morning. She apparently spent little time crying over the spilled milk of her breakup with musician John Mayer. While it is unclear whose baby she helped deliver, many think it was her sister’s newborn.

The news broke when Perry, 29, tweeted about adding to her resume that she assisted the delivery of baby in a living room, but she didn’t note whose nor where. It was reported late last year that she has an older sister, Angela Hudson, who was pregnant.

MTV implied that it was indeed Perry’s sister when they identified her as “Auntie Katy” in a breaking news item about the event.

Announcement of the home-birth comes on the heels of Wednesday’s news that she had broken up with John Mayer, 36, yet again. The two had apparently been fighting. The approximately 18-month relationship has been fraught with break-ups, it seems, and news of each break-up and make-up “Roars” through the headlines.

Yesterday, she also made news when she “Kissed a Girl.” According to Glamour Magazine UK, she was at a Miley Cyrus show in Los Angeles for the opening week of the Bangerz tour when Cyrus called her to the front of the stage. There, before adoring fans and the flash of hundreds of iPhones that quickly tweeted the moment, Cyrus grabbed Perry and kissed her. The song she was playing during the kiss was “Adore You.”

Cyrus did not waste any time tweeting the picture. She made a comment about how she kissed a girl and liked it right after the song was finished.

Also at the L.A. show were Kendall and Kylie Jenner as well as Nicole Richie with her husband, Joel Madden. There were no reports of lip-locks with any other celebrities.

Katy Perry is preparing for her own upcoming world tour, but it is unknown if she will offer the service of baby delivery while she is on the road. Both women got their start with Disney and both have gone on to have raunchy music videos that have prompted a lot of debate about sexuality.

On Valentine’s Day weekend, US Magazine had reported that rumors of a marriage proposal were false but that a wedding was sure to occur.

By Monday, February 24, however, E! News broke an exclusive item about the couple’s latest break-up. It also noted how the two had recently been in different parts of the world. Katy Perry was in Europe while Mayer was in New York.

Some have said that the stress of the upcoming tour may be the reason for the split. Perry is said to have a stream of dates from May to November that will keep her busy. Mayer, who is soon to start a world tour as well, will only be touring from April until June.

Very little seems to have been said by Mayer. While Katy Perry has been in the news non-stop because of the break-up, the kiss and now the baby delivery service, few media outlets seem to have much news about him.