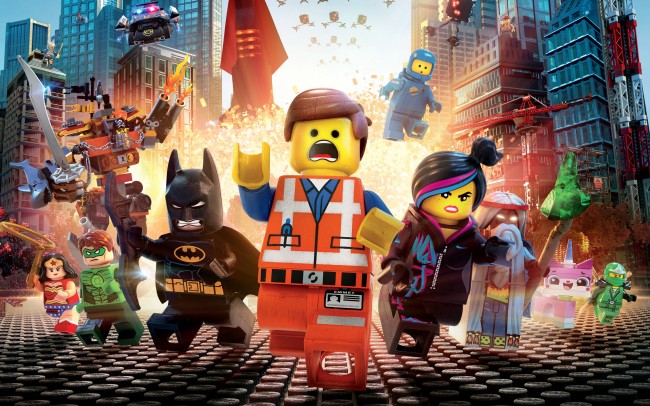 The Lego Movie, an animated film based on Lego building blocks topped the sales charts in American and Canadian cinemas for an astonishing third weekend in a row, marching onward to but the “block” in block buster this year. The movie, released by Warner Bros, beat of a tough competition from 3 Days to Kill and Pompeii, both of which opened this weekend.

The Lego brick toy has a long history and might by some be considered to have fueled the imaginative growth of generations, or at least, be a part of their childhood memories. Founded in 1932, the Danish company is now owned by the grandson of the founder and remains a family owned business while simultaneously ranking as the third-largest toy manufacturer in the world, in terms of sales, having ventured from being a small carpenter’s workshop just over 80 years ago. The Lego brick in its current form was first introduced in 1958, and still remains the foundation.

The Lego Movie, released by Warner Bros, tells the story of the evil tyrant, Lord Business, and his attempt to glue the universe together, and features the voices of Will Ferrell, Morgan Freeman, Elizabeth Banks and Will Arnett. Lego versions of Abraham Lincoln, the Green Lantern, Batman and Star Wars characters are among the appearances included in the film, giving it an appeal to not only children, but also adult audience members. The voice of Emmet Brickowoski, an ordinary Lego figure who is considered to be crucial so that the toy-block world can be saved, is supplied by Chris Pratt.

The Senior Media Analyst at Rentrak, Paul Dergarabedian, reportedly said that The Lego Movie was lifting the overall marketplace with its successful business. Further, he’s reported to have stated that it’s staying power is pretty unbelievable, with over $31 million in its third weekend, to which he added that it would be a successful opening weekend in the first quarter, for any film.

In comparison to the $31 million, the rivals; 3 Days to Kill featuring Kevin Costner, banked $12.3 million placing 2nd and in no way threatening the top score, and the 3rd place went to Pompeii with $10 million in ticket sales. Both of these movies were opening this weekend, while The Lego Movie had a record-setting debut of $69 million, earlier this month.

Budgeted at $60 million, The Lego Movie had grossed $183,2 million in domestic revenue as of February 22. The independently produced 3 Days to Kill had a budget of $28 million and Sony’s Pompeii has a reported budget of $100 million estimated, giving it a long way to go still in order to become profitable. Among the other motion pictures in the top of this weekend’s charts are such titles as Robocop, The Monuments Men and About Last Night.

From a small carpenter’s workshop in Denmark, to homes around the world, through 80 years and generations of children growing up, and now to Hollywood’s top sale’s charts, some might say that with The Lego Movie the Lego brick toy could be the building block to the blockbuster of the year.