By Alexandria Ingham on February 4, 20142 Comments 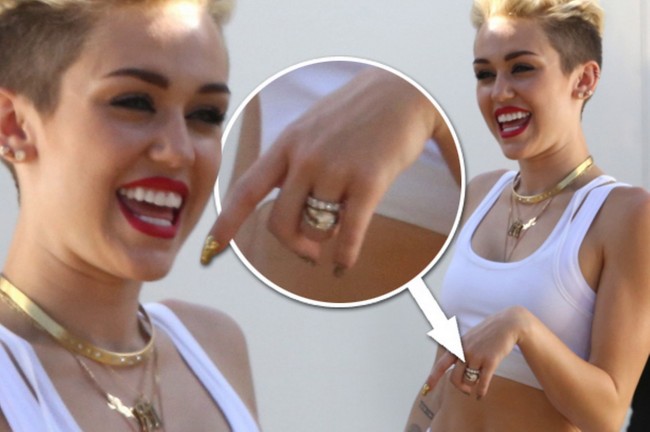 Miley Cyrus has lost her $100,000 engagement ring from Liam Hemsworth. The former Disney star admitted that it fell down the drain while she was in the shower. At least that is what she believes.

Hollywood Life reports that in a recent interview, the wild child explained the last place she remembers seeing the ring was in the shower. This was during her recent interview with Love magazine, a British publication.

Cyrus and Hemsworth started dating in 2010 after meeting on the movie set for The Last Song. It was his first big hit after moving to Los Angeles from Australia and a very daunting time for him. The pop princess had lived a childhood of being in the limelight, so seemed the perfect choice for the upcoming star. There were bumps along the way for the duo, but by June 2012 they were engaged.

Hemsworth splashed out on the 3.5 caret engagement ring, which cost him $100,000. It was a true sign that he cared for her and wanted to give her the best. However, by September 2013 the pair split up and this time it seemed for good. Shortly after the split, Hemsworth explained that he was much happier and felt more grounded.

His ex-fiancée wasn’t bitter about it either. She explained that 19 was too young to get engaged, but she didn’t realize it at the time. The Hannah Montana star also explained that she was scared to be alone before then, but the relationship should have ended sooner.

Cyrus losing the $100,000 engagement ring was likely a mistake. During her interview with Love, she did share that they still communicated and they were friends. They have been friends since she was 16-years-old and it is not a time in her life that she ever wants to forget.

The reason for the breakup has never been fully confirmed. It seemed at the time that it wasn’t quite amicable, but the recent interview would suggest something different.

Allegedly, Hemsworth wanted his ex to keep the engagement ring, which would explain how it could go missing in the shower. He never wanted it back; maybe he felt bad enough about breaking her heart as it was.

The pair have gone their separate ways since. Hemsworth has reprised his role as Gale Hawthorne in the Hunger Games franchise, while Cyrus has continued to make headlines for questionable antics. The good news for fans is that they remain friends, but they are unlikely to ever get back together. Besides, would Hemsworth really want to get back with someone who lost his $100,000 engagement ring down the shower drain, like Cyrus suspects has happened?