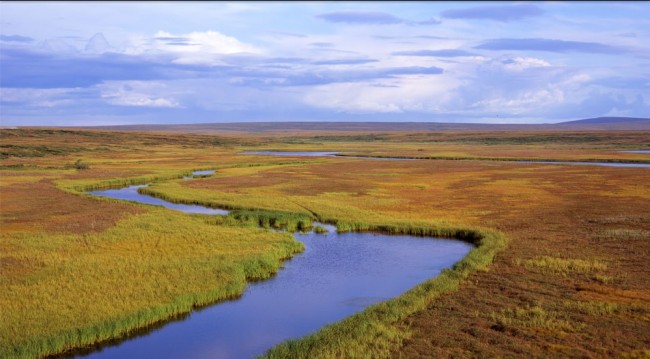 There has been a standing theory for some time that paleoindians, the first Native Americans, came over the land bridge that once existed between Asia and North America during lower waters of the last Ice Age. The theory states that the people who followed big game onto the land bridge would have included a small founding group that came in about 14,000 years ago, waiting a few thousand years until the glaciation that once covered most of North America receded and offered these intrepid hunters a corridor south. New DNA and ecological evidence, however, along with previous scholarship, now indicates that the proto-Native American groups would have had to start the crossing as much as 25,000 years ago, camping in the Arctic and boating through “Beringia” for thousands of years.

Estimates as to the length of stay for the Native American settlers of the Beringia region have gone up to as far as 20,000 years. The reason for this estimate is that evidence for human habitation in northeast Siberia goes to about 30,000 years ago and then disappears around the peak of the last Ice Age. There is also no evidence of humans in North America at that time. There is only one place these people could have gone to avoid the Siberian glaciers, and survived during that 15,ooo year period, and that is a place we have until recently been unable to study, since it is now under sea.

Today a study has been published in Science that suggests there is ample DNA evidence to support this theory of a long stay in Beringia. Scott Elias, a paleoecologist who hails from the University of London, working with the University of Colorado archaeologist John Hoffecker and University of Utah anthropologist Dennis O’Rourke, have studied the results of core drilling that took place in the Bering Strait and the Chukchi Sea in the 1970s and 80s, from the seabed that was once the floor of Beringia.

The region where the ancestors of the Native Americans once tarried is now largely under hundreds of feet of water, but the cores taken by the United States Geological Survey to seek gas and oil revealed rich fare for the paleoecologist’s team, including samples of pollens and other plant material and evidence of Ice Age insect activity.

The material from these cores made it possible for the team to prove exactly how it was possible for the paleoindian groups to have survived for such a long period trapped between the glacial covering of North America and the less resource-rich northeast Siberia. It seems that the Beringia region was high enough to be dry rather than marshy in some places; dry enough to sustain a corridor 600 miles wide in some places. This is a wide enough area to provide climate differentiation away from the ocean, so that in the central region, woody plants survived.

Though they likely did not grow very tall at all, remaining more a shrub-like covering, plants like alder and birch and even willow existed. This woody zone would have provided enough fuel to start fires that would have gotten hot enough to finally ignite large animal bones. Remains have already proven that these proto-Native Americans used the hot-, long-burning fuel to keep warm in the frigid temperatures. 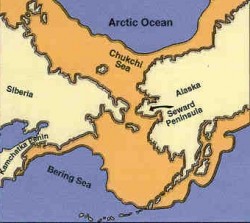 The game they had followed, unfortunately, could not survive in this lightly wooded zone, having adapted to life on the tundra. The herds would have lived closer to the edges of the glaciation, further in toward what is now Alaska and the Yukon. These large mammoths and bison and other woolly beasts would have been the quarry in long-range hunting trips, since the early Native Americans would have had to travel to where the herds grazed to hunt before returning to the areas where wood grew for their fires.

These hunter-gatherers also left little evidence of dwellings behind, for all the length of their stay. Aside from the burnt animal bones, there nothing so far to show that these hardy people set up any permanent structures, likely living in tents where none of the current residents of the area would want to live through a winter camping out.

Further evidence supports this theory. Both mitochondrial DNA from a 24,000 year old skeleton from Mal’ta in Siberia, as well as previous evidence of differences in the mitochondria and the Y-chromosomes of early Native Americans have shown that the descendants of these hardy travelers diverged from Siberian peoples as far back as 25,000 years ago, from Eurasian and East Asian groups.

Before this evidence came to light, many scientists believed that Native Americans split off from Siberians and East Asians approximately 14,000 years ago. This evidence shows the differentiation happened earlier, saying in effect that they started the journey over the land bridge thousands of years before once thought. Since the boy from Mal’ta was related to Eurasians but not related to East Asians, while Native Americans inherited from both groups, the paleoindian groups were likely to have come over the land bridge in multiple migrations.

Put together with dental evidence of differentiation and with linguistic clues, this new evidence supports the theory of waves of settlement, since different groups would have been lured over the land bridge from different areas over a long period. After all, the land bridge that linked Asia with the New World was open for thousands of years, and likely went through many different variations in climate, topology, and ecology.

The likelihood is that the largest paleo-Native American groups passed down a corridor that finally opened up between two sheets of ice in North America at the end of the long camping trip, allowing first one and then another group of paleoindians to settle what is now the U.S. and further south.

Further complicating the picture, however, there is evidence of settlement in South America that predates the earliest settlement in what is now the continental United States. 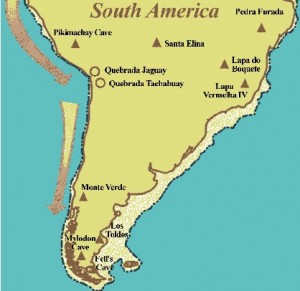 The first evidence of Native Americans in the U.S is a stone point from Clovis, New Mexico dating to 11,500 years ago. Strikingly, there is evidence of habitation as far south as Monte Verde Chile, upriver from the sea, that dates to 14,800 years old, over 1,000 older than the Clovis point. This charcoal and mammoth bone evidence dates to a period in which the North American ice sheet did not yet have a corridor for the herd-hunting Beringians to travel. This indicates that at least some paleoindians must have found another route south. The ancestors of today’s Native Americans may not just have camped but also boated through Beringia to reach the rest of the New World.

Scientists posit that not only inland big-game hunters but also coastal fishing peoples would have traveled the land bridge. Such people could have followed the coastlines of Beringia, which would have resembled a group of wooded islands, coves, bays and inlets much like the current coast of Canada. Unlike a single contiguous coastline, this topography would have protected coastal people and ecology from the weather. It would also have provided plenty of resources for a seagoing to follow the protected coastline south and to leave hearths and footprints in Chile before their inland contemporaries would have been able to pass the ice sheets and venture south and inland.

Unfortunately this is only one possible explanation for the remains in Monte Verde, since most of that ancient coastline is under the now risen seas, along with any evidence of habitations that would likely never have strayed far inland.
Maybe someday similar core samples will be taken of the old coastlines of western North America, yielding some clues as to how these early settlers made their way to Chile before their inland, big-game-hunting compatriots made it south of the big ice. Until then we have evidence that Native American ancestors camped their way through Beringia for thousands of years…and theories that some of them may also have boated their way down to South America.

The Hindu
Past Horizons
National Geographic

One Response to "Native American Ancestors Camped, Boated Through Beringia"