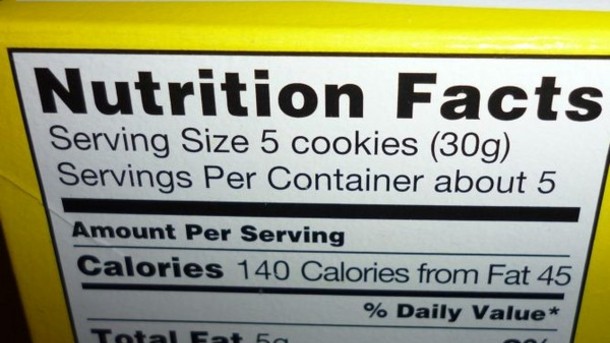 Nutrition labels are notoriously misleading. Ever eat something where the calorie count says 150 calories, but on closer examination it turns out that little item was three servings? Misleading labeling may become history if the FDA and Obama administration have their way and nutrition labels on packages are changed to reflect reality.

New “Nutrition Facts” labels are being proposed today that will make the information easier to read and understand. The labels, which are found on nearly all food packages in grocery stores, would display calories in larger, bold type and added sugars information would be included.

The biggest change, and probably the most shocking for consumers who read the labels, will be realistic serving sizes based on amounts people really eat. So, the small ice cream container that used to say 250 calories may soon show 500 calories, reflecting that normal servings are twice what was previously represented. For items that are typically consumed at one time, such as a 20-ounce soft drink bottle, the updated label will base the nutrition information on the entire package, not a fraction of it.

The proposed alterations to nutrition labels reflect changing emphasis from nutritionists on particular ingredients and the reality that most people are not aware how much sweeteners they consume. Fat content was the focus when the labels first appeared more than 20 years ago. They were initially voluntarily added to cans and boxes, but became required in 1990 for most packaged foods. Now, with more discussion on obesity, diabetes and other public health concerns, nutritionists are changing what they believe is important to display to calorie consumption and added sugars.

The FDA proposes removing the “calories from fat” line currently in use to focus on total calories. While the FDA already requires packages to list the amount of sugar in a product, the proposed labels will show “added sugars” to differentiate from naturally occurring sugar and sweeteners added by the manufacturer. Natural sugar is found in fruits. Added sugar is from corn syrup and concentrated juice in addition to white and brown sugar.

Amounts of Vitamin D and potassium would be displayed just like iron and calcium. There would also be updated daily values for sodium, dietary fiber and other nutrients. For example, the daily recommended limit for sodium has been 2,400 milligrams, but the proposed rules drop the value to 2,300 milligrams.

More people look at the nutrition labels now, according to researchers. The US Department of Agriculture reported that 42 percent of adults between 29 and 68 look at the labels more or all of the time when shopping. That is an increase from the 34 percent who did during a 2007 study.

The new nutrition labels, however, are years away from hitting shelves. The FDA is opening a 90-day comment period on the proposal and does not expect to finalize the actual rules for another year. At that point, recognizing the reality that it will cost an estimated $2 billion for companies to revamp the packaging on 700,000 products, the FDA is planning to give food manufacturers two years to reflect the new nutrition information and labels on their products.