A number of medical articles, studies, and clinical trials have demonstrated that smoking cessation can be assisted through yoga. Information about methods such as a yoga practice that can help smokers quit are more important now than ever, especially for women. While it may seem that the addiction is in decline, tobacco smoking remains the leading preventable cause of death among American women.

In a recent study published in the Journal of Women’s Health yoga was shown to significantly reduce anxiety, temptations to smoke, and increase overall well being in a group of smokers who were not already practicing yoga. Participants attended two 60 minute Vinyasa style yoga classes a week for 8 weeks which consisted of 5 minutes of breathing exercises and seated meditation, 45 minutes of dynamically linked yoga poses (asanas), followed by 10 minutes of more relaxing, closing postures and seated meditation.

The results of the study suggest that the positive effects of yoga on smoking outcomes may be due to a reduction of the negative symptoms associated with smoking cessation, decreasing stress and cigarette cravings, and improving mood and perception of quality of life. These findings are significant because they suggest that yoga is a viable treatment for women who need help to quit smoking but would like to avoid the use of medications.

Although the word yoga is typically associated with a group of young, lean people doing synchronized stretches on sticky mats, these physical postures are only a small aspect of traditional yogic disciplines. The simple breathing techniques of yoga, often called Pranayama, have been linked to improvements in overall well-being, reductions in stress and anxiety, and increases in self-efficacy. In a 2013 study published in Psychopharmacology these simple yogic-style breathing exercises were also shown to reduce cigarette cravings. 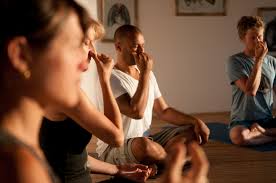 Another way in which yoga may provide assistance in smoking cessation without the need for a single downward-dog or other asanas is in the practice of mindfulness, or Vipassana. Studies have shown that mindfulness-based interventions are effective in reducing distress related to negative mood states by enhancing metacognitive awareness. In other words, the practice of mindfulness helps a person accept cravings as passing mental events occurring in the mind, and can alter their attitude or relation to cravings such that they are less likely to influence subsequent behaviors.

In a systematic review of literature involving smoking cessation through yoga, fourteen different clinical trials were shown to support yoga and meditation-based therapies. Published in the Oct. 2013 volume of Drug and Alcohol Dependence, the review points to a number of favorable outcomes where yoga was used an aid to stop smoking. However, due to the small number of studies available and associated methodological problems, more clinical trials with larger sample sizes and carefully monitored interventions are needed to greater define the mechanism and effective methods of smoking cessation through yoga.