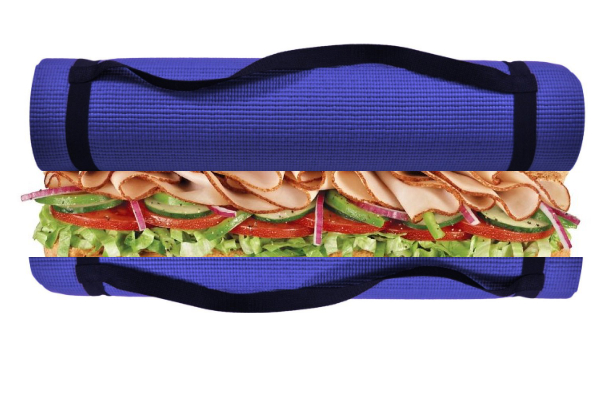 Subway has recently said they were in the process of removing a chemical in the bread that is found in yoga mats. Azodicarbonamide (ADA) is used in the bread baking process in order to add elasticity and strengthen the dough. This chemical is found in numerous foamed plastics such as yoga mats and the soles of shoes. Subway bakers are not the only people who put ADA in their foods, in fact, basically all other bread baking companies do it as well. It is common to find this chemical in loaves of bread from the grocery store and sandwich buns from practically all fast food chain restaurants.

Tested on mice, after the mice had been consuming this chemical, scientists commented the mice started to get cancers in their lungs and blood vessels. The Center for Science in the Public Interest had recognized this as a carcinogen and said that it can pose a small, negligible risk to humans if consumed. Chronic exposure to ADA testing has killed numerous rats and dogs and has been claimed to induce asthma in humans who work in the production of the chemical. It is no wonder that it is not legal in the European Union and banned in Australia.

Bakers have claimed that the reason they were going to take ADA out of the bread was for their “bread improvement process.” If that is the case then many would wonder why the chemical was used in the first place. The Department of Agriculture and the Food and Drug Administration had approved this chemical to be put into the baking process claiming it has little risks for human consumption. That is why the bakers had started to use it in their baking process to take advantage of its dough strengthening properties. The American Bakers Association (ABA) calls it a “dough conditioner” that gives the dough volume and certain texture effects to the finished loaf of bread. They claim that if they were to take out the ADA, then there would be no other substitute that could work as well as that specific chemical.

Many believe that the ABA should look back into the utilization of iodine. In 1960 bread producers have used a substantial amount of iodine as their way to condition the dough. The recommended daily allowance of iodine was served in one piece of bread. The United States recommended daily allowance was much less than in other countries. In fact, Japan consumes one hundred times more than the U.S. does. It is because iodine contains so many good properties other than dough conditioning.

Iodine is necessary in keeping a healthy and functional thyroid. It is also considered an anti-viral and anti-bacterial nutrient that aids in increased brain functioning and prevents cancers to the breasts, ovaries, and prostate glands. Regions that are iodine deficient have been noted to have a massive decrease in I.Q. as well as cancer and thyroid disorders. In 1980 the government told bread producers to take out the iodine because it was no longer safe or necessary for the diets of Americans. They replaced it with Bromine which is toxic to the body and interferes with the iodine processing in the body.

The reason why they would take out the iodine and replace it with bromine and ADA is unknown. It is hard to believe that they may have thought the main ingredient in plastic foams could be more beneficial to the human body than iodine. No matter what the reason may have been, it is not only in the bread. Many do not realize the harmful chemicals contained in distributed food. The problem though, is that the harmful chemicals are in pretty much everything that the average American consumes and there is little anyone can do about it unless they are capable of producing their own food.

Why does bread have to be manipulated though? The people think they are consuming regular bread, so why not just bake regular bread. The ingredients are as simple as yeast, flour, water, milk, sugar, salt, butter and eggs. Subway, of all health conscious food providers, should understand that if bread is what people think they are getting, then there should not be any reason at all for bakers to try to feed them yoga mats.