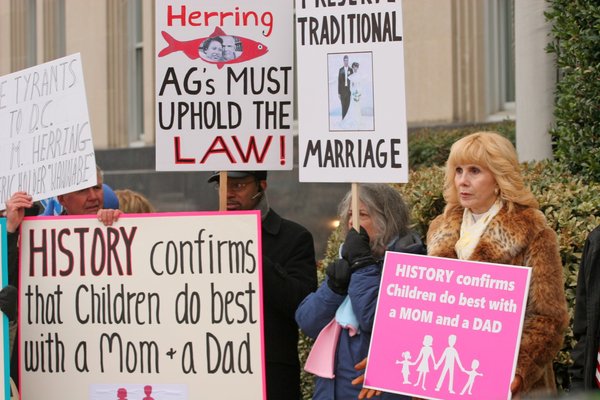 A federal judge overturned Virginia’s ban on same-sex marriage, calling it unconstitutional. Judge Arenda L. Wright Allen of United States District Court for the Eastern District of Virginia, in Norfolk stated that same-sex marriage fell under the premise “that all men are created equal.” She also made reference to Due Process and Equal Protection provisions of the 14th Amendment. The decision marks the strongest legal reversal to date of restrictive marriage amendments among states in the Deep South. The Virginia constitution had adopted a ban on same-sex marriages in 2006.

In a movement that began with Massachusetts in 2004, 17 states and the District of Columbia now acknowledge gay marriage. Most of those states are in the Northeast. None of them is in what is commonly referred to as the Deep South, which includes Virginia.

A legal team representing the private organization, the American Foundation for Equal Rights, argued the case. The team supporting the ban consisted of two court clerks. One of whom was represented by Alliance Defending Freedom, a coalition of conservative Christian lawyers.

When the case was first filed, the state’s governor and attorney general, both Republicans, supported the ban. But Democrats took over both positions in November, the new attorney general of Virginia, Mark R. Herring, stated he believed the ban to be unconstitutional.

In 2006, 57 percent voted for an amendment declaring marriage between one man and one woman to the state constitution. With some irony, those supporters included Herring, then a state senator from Loudoun County. Herring, who took office in January 2013, announced soon after that he believed the state’s ban to be unconstitutional.

Supporters of the 2006 ban on same-sex marriage feel betrayed, and that their vote was completely disregarded. Victoria Cobb, president of the Family Foundation of Virginia, stated that Virginians were disenfranchised by this ruling, that overturning their vote “rendered it meaningless.”

Similar laws exist in other Southern states. A federal judge in Kentucky ruled the state must recognize same-sex marriages performed in other states. However, he did not state Kentucky had to adopt similar measures.

Opponents of same-sex marriage intend to appeal the decision. Meanwhile in spite of her ruling, Judge Wright Allen has stayed the execution of the ruling, until after the appeal. Her concern is that if same-sex couples were given marriage licenses, these might be revoked as quickly as they were issued, should the Court of Appeals overturn her ruling. The judge wanted to avoid that kind of chaos.

Opponents are no doubt concerned. If the Court of Appeals confirms the lower court’s ruling, bans on-same sex marriages in other states could be voided. Many legal experts predict that this case will eventually end up in the United States Supreme Court.

The Supreme Court has been notably supportive of same-sex marriage in recent years. In 2013 it overturned a part of the Defense of Marriage Act, requiring the federal government to recognize gay marriage from states where it is legal. Most of the Supreme Court justices voiced the belief that discrimination against gay and lesbian couples was unjustified. It also upheld the overturning of California ban on same-sex marriage due to a technical issue with the decision.

The case in Virginia appears to be a long fight for both sides of the same-sex marriage debate. Odds are strongly in favor of the case being heard by The Supreme Court of Virginia. From there, it may proceed to The United States Supreme Court. No doubt people in other states across the country will watch Virginia closely, as that state’s ban may not be the last to be overturned…then reinstated.