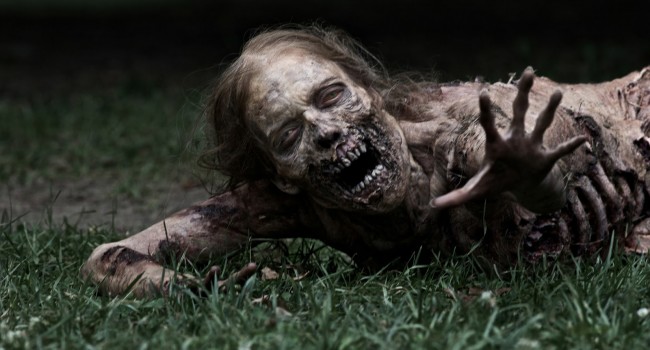 The mid-season premiere of AMC’s The Walking Dead aired last night, and is bound to have made zombies the leading Halloween costume of 2014. Approximately 16.1 million people tuned into the hit TV series but the widespread obsession with zombies is not limited to youth. The great bulk of The Walking Dead‘s audience is adults; about 10.4 million viewers of last night’s premiere were between the ages of 18 and 49. To put that into perspective, more adults tuned into The Walking Dead than adults who tuned into this year’s abysmal Super Bowl. One cannot help but wonder why so many people are obsessed with zombies. Is the widespread obsession of The Walking Dead fans a cult obsessed with death?

The power of the zombie epidemic is not limited to fans of The Walking Dead. This author does not claim to be immune to the zombie virus. Zombie fans outnumber those infected by this year’s H1N1 virus. Indeed, universities across the country are putting our hard-earned tax dollars to work by offering courses in “zombie culture.” But this only touches the tip of the iceberg. Many states offer zombie 5k marathons each year. Let us not forget the lifeless grips of Hollywood that has churned out a plethora of zombie films within the past 10 years. The abundance of zombie films makes them a unique, subclass of horror within their own right. And don’t forget about zombie paraphernalia including clothing, posters and apps.

Zombie fans are the equivalent of a cult that gathers every week to blankly stare at a TV screen with open mouths and drool about the impeding zombie apocalypse. Afterwards, zombie fans flock to their savior, the Nerdist Chris Hardwick, to discuss this week’s zombie revelation. Don’t get this author wrong—zombies are awesome. Yet the widespread obsession with zombies is far beyond the purview of “normal.” Does the widespread enthusiasm that filled the social web upon the first reports of bath salts disturb anybody else? This sort of apocalyptic obsession is equivalent to the widespread obsession with the Left Behind fiction series among Christians back in the 1990s. Although Left Behind is fictional, many of its readers hope, whether consciously or subconsciously, that the eschatology depicted is an accurate forecast of the future. For these readers, a mushroom cloud over Israel or a worldwide earthquake would not necessarily be regarded as a bad thing.

This is not to be browbeat Christians or The Walking Dead fans, although the Book of Revelation does talk about “the dead rising.” The history of humanity has a long obsession with death and doomsday that can be found in countless doctrines and religious writings. Eschatology is even a sub branch in contemporary cosmology that contains various theories about how the universe will end. What makes zombie fiction so enticing is its ability to tap into our archaic desire to peer into the face of the grim reaper while teetering on the edge of the abyss without blinking. The Walking Dead fans are indeed a cult obsessed with death.

8 Responses to "‘Walking Dead’ Fans a Cult Obsessed With Death"