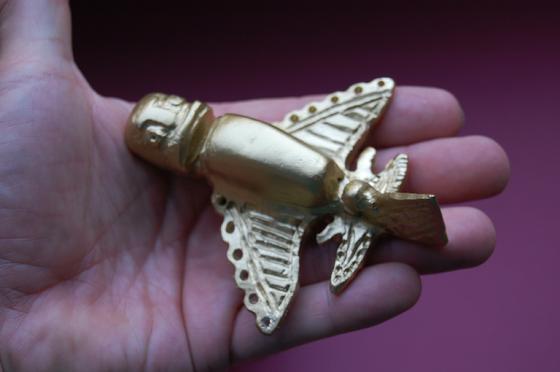 The hustle and bustle of modern society is greatly accommodated by the numerous technological advances that are utilized by millions. The convenience of life now seems a far cry from the daily, primal struggle faced by others in earlier generations. Modern society would find it hard to imagine a life without conveniences such as cars, boats, and airplanes.

Nowadays society, for the most part, no longer has to rely on the strength of their own backs or the use of animals as modes of transport. In fact, modes of transportation such as aircrafts have been the fascination of many for longer than previously imagined. Even ancient civilizations were fascinated by thoughts of flight.

The most recent of these is the airplane, which was invented in 1903 in Kitty Hawk, North Carolina. The Wright Brothers, Orville and Wilbur, were the first to make flight a reality for the known world. However, recent evidence casts doubt on whether or not these two ambitious brothers were actually the true inventors of the flying machines. In fact, artifacts uncovered in archaeological investigations done in Egypt and the ancient Mayan ruins suggest that these societies,ancient as they may be, had conceived the notion long before the Wright Brothers’ existence.

Strikingly accurate metal sculptures in the likeness of aircrafts were found scattered among the area of coastal South America. When evaluated for age, they were estimated to have emerged from somewhere between 500-800 BCE. Because the models had been hewn of gold, an exact date was not possible. However, archaeological evidence surrounding the area served as support that the pieces could be dated at a minimum of 1,000 years in age. The models found bore striking resemblance in craftsmanship to modern airplanes used today.

During an Egyptian expedition in 1898, a team of researchers uncovered a remarkably perfect wooden model airplane in a tomb located in Sakkara. Because it was made of wooden material, it was possible to hone in on a more accurate date. The small plane they discovered that day was dated at having been created around 200 BCE.The piece was then exhibited in the museum at Cairo in a special display. Due to avian facial features depicted on the nose of the airplane, it was mistaken for a sculpture of a bird and was put on display in the gallery of birds.

It remained classified as such until 1969, when Dr. Khalil Messiha took particular interest in the artifact. What he noticed were several discrepancies in the design of the model in comparison to other pieces of Egyptian archaeology and art that were classified as birds. Most notably was the model’s intentional omission of avian legs, which were commonplace among other bird artifacts. Also, traditional Egyptian birds had painted feathers, but the model did not. Incredibly, hieroglyphs depicted on the sides of airplane translate to the inscription “Gift of Amon,” who was the ancient Egyptian’s god of the wind and the air.

No one knows if either of these instruments were small models of airplane technology far ahead of their times, or if they were simply the creation of incredible visionaries. If some concept of flight were not in the works, many wonder how then would a number of artifacts pointing to the airplane with startling accuracy turn up from different areas. How would cultures which had no geographical or societal connection to one another have conceived with such accuracy the same notions? The meaning of the evidence of airplane artifacts remain anyone’s guess.

i09 We Come From The Future