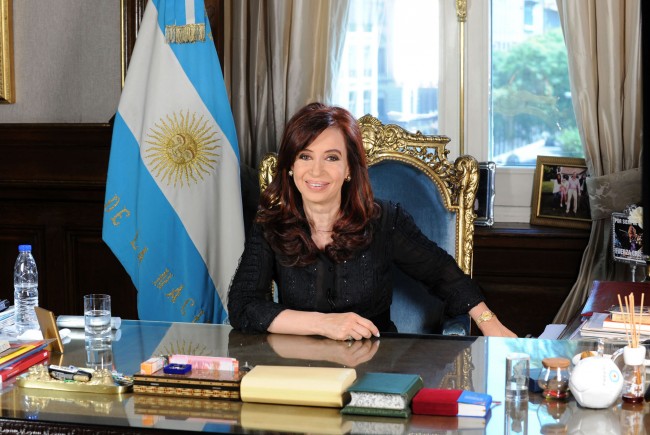 Sources with inside access to Casa Rosada say that Argentina’s President Cristina Fernandez de Kirchner may be considering early retirement. Following “brain surgery,” an investigation into her family’s wealth, a possible connection to a double suicide in Arizona and approval ratings that are dropping faster than the peso, Kirchner appears to be unwilling to maintain her position as the head of South America’s second largest country.

Kirchner allegedly had surgery on October 8 to remove blood that had pooled on the surface of her brain. The problem began following a supposed accident where she fell and hit her head while at home. The “surgery” came at an opportune time for Kirchner.

Re-elected in 2011 with over 50 percent of the vote, Kirchner had been speculating about the possibility of getting the country’s constitution revamped so she could run for a third term. The poll numbers continued to head southward during the Argentine winter and as spring arrived, her ratings were at the lowest point in her political career.

With an important nationwide vote coming up October 27, Kirchner scurried around looking for some way to minimize the impact her dropping support would have. If Kirchner’s party did poorly in the October election, then Kirchner’s majority in Congress would be reduced and her expected third term would not materialize.

Kirchner dropped out of sight to have the “surgery” and her party suffered heavy losses in the October 27 vote. The worse-than-disappointing showing ended any speculation that she may try to amend the constitution to allow for that third term.

Rebuked by the populace, Kirchner maintained a low profile when she returned to work in November 2013. As she exited the hospital, Kirchner looked more like someone who had undergone plastic surgery than someone who had suffered the trauma of brain surgery. Finally addressing the nation in January, 2014, she failed to acknowledge her party’s defeat in the recent election or to address the economic crisis facing the country.

If “brain surgery” wasn’t enough to get her to toy with the idea of resigning, her administration’s possible involvement in a double murder might do it.

In November 2012, Scottsdale, Arizona police were called to a home at 10365 E. Corrine Drive. Inside, they found Daniel Peralta and his wife, Laura, dead from gunshot wounds. Peralta was CEO and CFO of Delta Mutual, Inc., and his wife was a dance therapist. The police wrote the double shooting off as a case of domestic violence which ended in a murder-suicide. What makes this strange, the couple had no history of domestic violence. During the investigation, the police said they “…could not confirm…” that either of the Peraltas were responsible for the shooting.

Sources who had been close to the Peralta’s say that the CEO didn’t own a gun and had been leery of them ever since a childhood hunting accident in his native Argentina.

Another factor that makes the alleged murder-suicide shooting worth examining is who exactly was Peralta and what else was going on in his life at the time.

Daniel Peralta had been Argentina’s central bank director. His friend, Daniel Lalin, held a job as the Buenos Aires City treasurer. Together, the two men were big winners in the Argentine lottery which awarded oil exploration leases. Neither Peralta or Lalin had the industry experience required by Argentine decree. What they did have was the $20,000 to pay the “administrative fee” required to bid.

Peralta was just one of Kirchner’s friends to win the right to drill. Appointed to his central bank post by Argentine President Carlos Menem, Peralta maintained close ties with the Kirchner’s. After gaining the leases, Peralta and his wife bought a controlling interest in Arizona-based Delta Mutual, Inc in 2008. For the next four years, the Peraltas used Delta to buy and sell oil leases in the Argentine province of Salta.

In March, 2012, Menem was ordered to stand trial on charges relating to the 1994 bombing of the AMIA Jewish community center which killed 85 people. According to sources within Delta, Peralta had been called to testify and was preparing to return to Argentina when he and his wife were found dead in their Scottsdale home.

Accusations of corruption in the Kirchner administration are well-known and well-publicized through the land of “La pampas.”

In 2012, noted Argentine journalist, Jorge Lanata started to expose corruption in the Kirchner camp. His show, which aired on Sunday nights on Channel 13, was a rating leader as it laid bare the scandals and corruption of Kirchner, her deceased spouse and their allies in the impoverished province of Santa Cruz. Crooked connections tied Kirchner to construction corporations, luxury houses, private jets and money laundering, and Lanata let it all air out on national television.

Kirchner’s wealth has increased by over 700 percent since the day when her late husband, Nestor, took the oath of office. Lanata released documentation that links Kirchner to public figures and businessmen who have profited tremendously from their friendship with the Kirchner’s. On live television, Lanata exposed money transfers and other financial arrangements, many going into the hundreds of millions of dollars.

Latnata’s boss, the media group Clarin, started to be a sticking point for Cristina. As Lanata’s popularity rose, Kirchner’s fell just as swiftly. Desperate to stem the hemorrhaging of national support, Kirchner and her allies maneuvered to find a way to get the Kirchner controlled federal court to break-up “Grupo Clarin.” Her efforts were finally rewarded in January, 2013 when Clarin was order to break itself into smaller blocks for auction.

While Argentina President Cristina Kirchner continues to mull over her quit-no quit decision, the country presses on in the midst of its worse economic crisis in over a decade.