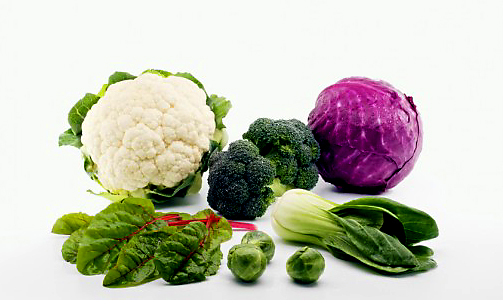 Cardiovascular disease and cancer prevention can be aided by eating more cruciferous vegetables, which are a group of vegetables that are usually dark green and leafy in flowery forms. These include cabbage, bok choy, cauliflower, broccoli, Brussel sprouts, and kale. Numerous studies have shown that populations who consume these vegetables have a higher risk reduction of getting cardivascular disease and cancer than those who eat less or not at all.

In a 2013 study among 1,005 Chinese women that was published in the Journal of the Academy of Nutrition and Dietetics and was part of the Shanghai Women’s Health Study, researcher Dr. Gong Yang of Vanderbilt University Medical Center in Nashville, Tennessee, and colleagues found that women who consumed 1.5 cups of cruciferous vegetables daily, the top fifth of the sample population, had significantly less inflammatory molecules in their bloodstream than those who ate one cup per day and half a cup a day, according to Reuters. The researchers measured three vital substances that cause inflammation: Interleukin-1beta (IL-1b), tumor necrosis factor-alpha (TNF-a), and interleukin-6 (IL-6). The top fifth had an average of 18 percent less IL-1b, 13 percent less TNF-a, and 25 percent less IL-6 than those who ate the least.

Two years before the women’s study, Yang and colleagues had published their 4.6-year-study that analyzed the mortality rates and cruciferous vegetable consumption among nearly 135,000 Chinese adults. Not surprisingly, they found that those who consumed more of those dark green vegetables had lower risk of death related to cardiovascular disease. However, they found no such relationship with cancer.

This doesn’t necessarily mean that eating cruciferous vegetables has no effect no cardiovascular disease and cancer prevention. According to the National Cancer Institute, cruciferous vegetables contain glucosinolates, which are sulfurous compounds that give these vegetables and sweat and sour aroma and bitter flavor. During food preparation, chewing, and digestion, the glucosinolates are broken down to form active substances that has been shown to exhibit anti-cancer properties. These substances include nitriles, indoles, thiocyanates, and isothiocyanates that can inhibit the cancer development in several organs in mice, including colon, liver, lung, bladder, and stomach.

Cardiovascular disease and cancer prevention can be as simple as eating more cruciferous vegetables, and it does not have to be a chore or require most people to rely on medications or expensive treatments. With a combination of an active and social lifestyle, adopting a diet that is rich in vegetables, fruits, and whole grains can greatly reduce the risk of getting sick. No diet books or strict rules necessary.