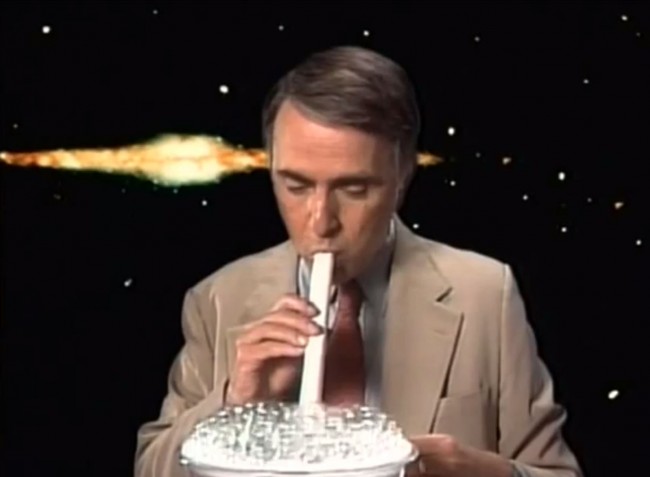 Carl Sagan has a message for America and the world: “The illegality of cannabis is outrageous.” Sagan is the popular scientist and astronomer who co-wrote, co-produced, and presented the immensely popular PBS show, Cosmos: A Personal Voyage (which is being relaunched by FOX with presenter Neil deGrasse Tyson), but he was also a public stoner and advocate of marijuana. From art and music appreciation, to the enhancement of enjoyment of food and sex, to creative thought and maintenance of the ego, Sagan recommended weed for the masses.

In 1969, Sagan penned an essay that appeared in the book Marihuana Reconsidered, published by Dr. Lester Grinspoon, that detailed his experiences with marijuana consumption starting in his mid-thirties. Sagan was initially skeptical of weed, noting the social stigmas of the drug, but the experiences of euphoria that were reported to him by friends, coupled with the fact that none of them said “physiological addiction” was an issue, eventually persuaded him to try. After he indulged, he continued using marijuana for the rest of his life.

Sagan is quick to point out that the effects of marijuana were never overpowering and that the high does not relieve one of their senses or perceptions of reality. When he experienced intense visualizations while high, he noted a duality of thought and recognition. He was aware that he was the one making and creating the images, while writing that there was another part of him which acted as an observer.

Being a scientist was central to Sagan’s being, and so he of course details the significance of being a stoner as it pertained to his work. Sagan writes, as only he can, about a shower he took with his wife while high, in which he had ideas related to the invalidity of racism “in terms of gaussian distribution curves.” That led Sagan write nearly a dozen essays on human biology, politics, sociology, and philosophy over the course of an hour. These were not just worthless musings of a pothead, but instead they were valid enough for him to use them in his books and lectures.

Sagan also relates a common notion shared by marijuana users, which is the enhancement of appreciation for sense-based experiences, most notably art and music appreciation, as well as enjoyment of sexual intercourse and food consumption. On sex while high, he wrote, “It gives an exquisite sensitivity,” and also “postpones orgasm.”

One of the topics that never seems to enter into the public discourse on pot is that of its effect on making people better as it relates to understanding and control of the ego. Sagan describes his experience after consuming marijuana, writing, “I see with awful certainty the hypocrisies and posturing of myself.” He also rebuked the widely accepted idea that marijuana users have silly, stupid ideas that only seem profound while high, but then are realized to be foolish upon coming down. He was convinced this was untrue. Instead, Sagan notes that the problems associated with capturing those insights on paper are not because they don’t survive scrutiny in the morning, but because, “ten even more interesting ideas or images” would come to mind while he tried to transcribe just the one. His criticism of being high simply seems to be that it made him too creative.

Now that medical marijuana is available in almost half the states in the US, in addition to the legalization of recreation use in Washington and Colorado, the old arguments of comparing the effects of pot to those of alcohol have been rehashed. Sagan finds important distinctions noting that his highs were always calm, intellectual, social, and introspective experiences, where his alcohol highs were anything but. He also describes that he has never experienced a hangover associated with weed use. He was able to perform tasks while high on marijuana that would be difficult, if not impossible, when drunk. “I am convinced that there are genuine and valid levels of perception available with cannabis,” and wrote that he had driven in high-traffic situations “with no difficulty at all.” He goes further, writing, “If you’re high and your child is calling, you can respond about as capably as you usually do.”

Sagan concludes his essay by touching on not only the acceptance of marijuana in a civilized society, but also its undervalued importance. He writes that marijuana use “helps produce the serenity and insight, sensitivity and fellowship so desperately needed in this increasingly mad and dangerous world.” Taken for what it is worth, Sagan’s experiences offer a unique insight into the often demonized drug from a scientist of note, and demonstrate that the label of stoner should not necessarily be a negative one.

One Response to "Carl Sagan the Stoner Scientist"