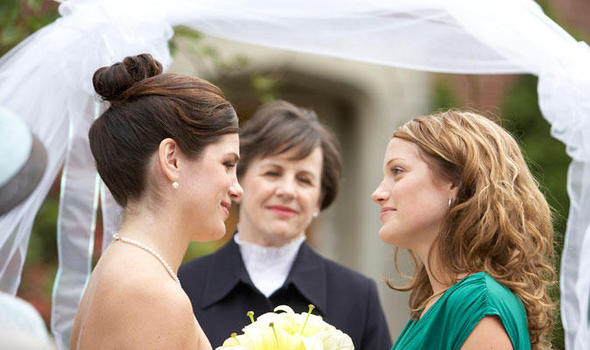 A long-awaited momentous turning point has finally occurred in the United Kingdom – although not every country in Great Britain will celebrate. The passage of a law whereby gay and lesbian couples can now get married took effect in England and Wales on Saturday morning, at 12:00a.m. However, the joyous experience is not yet open to those living in all parts of the U.K. Neither Scotland nor Ireland is included.

The marriage law comes after a decade of same-sex couples in England and Wales being allowed to form civil unions, but until now, without the joy and equal status of marriage. In July 2013 the measure passed in U.K. Parliament with a secure majority, with the enactment date set as midnight on March 28, 2014. The overwhelming parliamentary approval of the bill was backed by all three major parties, including the ruling Conservatives, and England’s Prime Minister David Cameron defended its passage.

In a sense, this change was taken in stride without much dissent in England and Wales. In contrast to the U.S. and other countries that have been entangled in vitriolic debate, opponents gave comparatively little resistance. Supporters expressed that passage of this bill was long overdue. U.K. has precedents: adoption rights for gays and lesbians, and permission for LGBT military to serve their country openly.

In a powerful yet uncomplicated statement, Prime Minister Cameron approved the new law, saying that it showed England as a country of proud traditions of respect, equanimity, and tolerance. He continued that the law delivers a potent message to youth who may be questioning their sexuality, letting them know that they are equal in the eyes of the law and society, regardless of their orientation.

Cameron said that the fact that opponents were not vociferous in trying to prevent the law’s passage shows the turnaround of attitudes in England and Wales. Today so many people are now open to the concept of gay marriage. Only 25 years ago, the law identified same-sex couples as “pretending to have a family relationship” and schools were legally prohibited from any action that might be seen as promoting homosexuality.

Advocates recognize the law’s passage as landmark, noting that it’s a relief to have loving unions validated and frankly, as commonplace and mundane as the relationships of heterosexuals. Supporters report that there is still work to be done in the U.K. While England and Wales now recognize gay marriage as legal, it is still prohibited in Scotland and Northern Ireland. Scotland recently enacted legislation that is expected to change that, and same-sex weddings are likely at the end of 2014. Northern Ireland, however, is another story, due to intense opposition from the Protestant churches and their official political parties. In fact, until the early 1980s, homosexuality was illegal in Northern Ireland.

One of the first couples to be married under the new law just after midnight had been together for 17 years. Their chief witness, Peter Tatchell, a human rights campaigner, spoke that their action allowed Great Britain to provide a more equal and tolerant environment. The couple took the opportunity to note that their circumstances were to be treasured and spoke of the contrast internationally regarding the struggle for gay rights.

Religious groups in England and Wales had a full spectrum of responses. In a profound statement, the Archbishop of Canterbury said Friday that, since Parliament had spoken, the Church of England would now stop opposing same-sex marriage in the U.K. He urged acceptance, now that the law had changed.

Other religious groups are not ready to give up the fight. The group Christian Concern said that the institution of marriage cannot be redefined just because of some want it to be. Despite the fact that marriage has taken various forms throughout history, they referred to gay marriage as seeking cultural dominance and being self-centered. Some prior cultural changes for marriage are that women used to be property of their husbands; now, there is a great deal of freedom, including a woman not necessarily changing her name to that of her husband’s.

A reverend with the Church of England, which opposes gay marriage, said that although the Church had not navigated these waters before, he would do what is right rather than be frightened into inaction. Pope Francis, too, has commented about gays and gay marriage. While he has strongly voiced opposition to same-sex marriage, he asked this past July how he could judge someone who is gay and has good will, and who searches for the Lord?

Many of those same-sex couples tying the knot in England and Wales felt compelled to express how fortunate they recognize themselves to be. They have spoken out in support of those who face discrimination and persecution just because of being gay. Freedom to Marry provides details of the 16 countries where LGBT marriage is now legal – from The Netherlands in 2001 to Saturday’s law for England and Wales. The list is extended to include other countries where LGBT couples are provided some degree of protections.

Another important list is which countries persecute their own citizens on the basis of their sexual orientation. The LGBT Asylum Support Task Force describes the types of punishments against gays that exist in the 88 countries. The punishments include imprisonment, government-sanctioned “corrective rape,” and sometimes the death penalty.

Many of the gay couples getting married now in England and Wales are including in their wedding statements that they hope their actions will send messages of support to gays who face discrimination every day in their own countries. They say that they recognize that theirs is a relative freedom. For example, last month Uganda President Museveni signed into law tough penalties against gay people. And, Russian law prohibits even the discussion of homosexuality if children might hear the word. Couples in U.K. hope that their openness will show other countries that they are stepping forward.

3 Responses to "England and Wales Now Open to Gay Marriage"