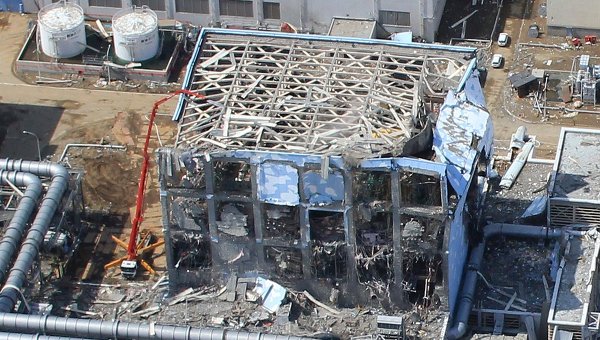 Fukushima Daiichi ‘s radiation decontamination effort was suspended today at the crippled nuclear power plant. Malfunctions in the water purification process dumped untreated water into tanks containing thousands of tons of partially purified water, according to Japanese news media reports. The failure of the Advanced Liquid Processing System (ALPS) is the latest in a series of setbacks troubling the Tokyo Electric Power Company (TEPCO) three-year campaign to clean up the shuttered nuclear facility.

In January of 2014, TEPCO issued a statement warning that nuclear radiation at the boundaries of the damaged facility had jumped to eight times the government safety guidelines. In February, one of the ALPS pumps shut down without warning, cutting the site’s decontamination capacity to 250 tons per day, 62.5 percent of the 400 tons of contaminated water being produced daily.

On March 16, the New York Times reported that unskilled and destitute workers were being hired to perform highly technical cleanup assignments at the crippled power plant. Previous reports indicated that the Yakuza – Japanese style crime syndicates – were involved in providing workers for the cleanup effort.

On March 18, 2014, scores of U.S. Navy and Marine corps personnel announced they were filing suit against TEPCO. Attorneys for a group of sailors from the U.S.S. Ronald Reagan are suing TEPCO on the grounds that the company misled the U.S. Navy about the level of radioactive contamination to which the sailors and marines were exposed . The suit alleges higher than normal rates of leukemia, infertility, birth defects, and blindness stemming from prolonged exposure to high radiation. The Ronald Reagan’s crew was exposed to high levels of radiation when they joined the international relief effort in the aftermath of the March 11, 2011 earthquake and tsunami that, together, killing 18,000 people and triggering the Fukushima meltdown.

The Advanced Liquid Processing System being used by TEPCO to decontaminate the radioactive water is still considered experimental. ALPS has been undergoing trial runs since March of 2013 but it has been plagued with glitches. This leaves open the question of what TEPCO had been doing with the contaminated water before March, 2013, and where that water is going now that the system has failed.

The ALPS system consists of 14 steel cylinders filled with filtering materials through which the contaminated water is pumped. The system is supposed remove 62 different types of radionuclides, including strontium and cobalt from contaminated water. One unit is dedicated to remove iron particles from the water. A second unit is designed to remove carbonates. Both units use reverse osmosis filters to clean the water, which then moves to absorption towers where additional radioactive materials are absorbed by special filters. Among other problems, the water purification systems create a highly concentrated, very radioactive sludge that must be stored indefinitely.

The Chernobyl nuclear disaster of 1986 only involved one nuclear reactor. The Fukushima Event involved three nuclear reactors. At Chernobyl, which is located in what is now Ukraine, more than 600,000 workers have worked at the site, ultimately constructing a lead and concrete “Sarcophagus” which is due to be replaced with a new structure before 2016, when the original sarcophagus was expected to fail.

The original cleanup at Chernobyl cost 18 billion rubles ($497 million in 2014 dollars.) The replacement structure is scheduled to cost $1.8 billion (US), an effort that is being funded primarily by international donations. TEPCO faces prospect of permanently encasing three of their dead reactors in similar structures, and Japanese construction costs are much higher than Ukrainian construction costs.

One of the ironies of these disasters  is that in each case the disaster was caused by efforts to make the plants safer. At Chernobyl, they were actually testing a new emergency shut down procedure when the accident occurred. TEPCO actually removed 25 meters of earth at the site, lowering the height of the facility from 35 meters above sea level to 10 meters above sea level for the specific purpose of making the power plant less vulnerable to earthquakes by putting the foundation directly on the underlying bedrock. In both cases, prevention efforts actually caused the respective disasters.

TEPCO is also being urged to pay more attention to the long-term problems that may be caused by the nuclear accident. More than 250,000 people residing within a 50 mile radius of the plant may have been exposed to high levels of radiation in the aftermath of the accident, but the Japanese government has thus far refused to initiate a systematic urine and blood analysis program to provide an “early warning system” against radiation induced illnesses, according to UN observers. To date, 75 cases of thyroid cancer have been identified among the 254,000 area residents who have been tested to date, twice the rate of thyroid cancer found in the U.S.

TEPCO never expected radioactive water to flow into the storage tanks, according to Masayuki Ono, the acting general manager in charge of the cleanup, who added that the company should have been better prepared for this situation. TEPCO now admits they have no idea how long it would take clean the damaged systems, if they decided to do so.

Fukushima Daiichi’s water decontamination program may have been suspended while TEPCO decides what to do next, but that is not stopping a floating debris field the size of Texas from washing up on the West Coast of the United States. No one, least of all TEPCO, knows what to do about that.